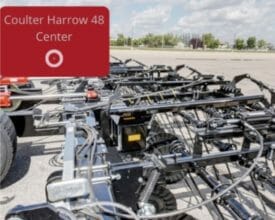 After Gates Manufacturing exhibited at a commodities trade show in 2017 and spent over $25,000 on a small booth, shipping for one of their smaller pieces of tillage equipment and travel costs, company representative Andy Gates knew he had to change tactics. He figured there must be some technology that could impress customers while still being cost efficient for trade show travel and sales visits.  He found his solution in virtual reality.

Gates Manufacturing is a family owned company that manufactures and sells agricultural attachment and tillage equipment. Gates focuses on bringing innovation and leading-edge technology to the equipment, in order to reduce farmers’ production costs per acre.

He’s sought the same innovation for the company’s marketing strategy. While looking for technology with a “wow” factor, Gates met Matt Chaussee at the Prairie Den in Fargo. Chaussee and his wife Katie are the owners of Be More Colorful, an augmented and virtual reality solutions company. Gates saw what Matt Chaussee was doing with virtual reality and 360-degree photography and thought it’d be the perfect next step for Gates Manufacturing.

“As a manufacturer, virtual reality has as much potential economic benefit for us as anything,” said Gates. “If I can interest a few customers with it, and generate some sales, it has a good payback.”

Gates had already been using drones and GoPro cameras to shoot videos of operating equipment, but knew that farmers want to see how the equipment was built, which isn’t adeptly conveyed with pictures and video. He and Chaussee began a project that so far has photographed two of Gates Manufacturing’s three main pieces of equipment.

“The process was relatively simple”, Gates said. “The biggest challenge was just finding a good time.”

The project began with Chaussee discussing pricing and the capabilities of the technology. Then the piece of equipment was brought to an open area with minimal background, in this case a parking lot at the Red River Valley Fairgrounds. They planned out four to five different vantage points on the equipment from which to photograph. Chaussee took numerous pictures, at varying exposure levels, from each point of view and the shoot took only about an hour. The next day Chaussee had the draft files for Gates to review.

After the review and a couple days of editing, the results were ready for Gates Manufacturing to place on their website.

So far, Gates is impressed. It’s still pretty new, but they’ve used it as a communication tool to their customers and dealers. Plus, through an analytics option offered by Be More Colorful, Gates is able to gain insight into viewers’ geographic regions, understand how long people are spending on the tour, and review which 360° scenes are of most interest to viewers, all of which can aid in selecting a target market. Through customizable links that can be sent to individual prospects, Gates Manufacturing can actively use these tracking analytics as a tool to determine level of interest and next steps in the sales cycle for interested parties.

Gates’ next move will be to create a virtual reality tour for a third piece of equipment, then continue to update the virtual reality features on the website as their tillage equipment is enhanced with further precision and smart technology.

His goal is to be able to travel to international trade shows with only virtual reality tools and a segment of the equipment.

“We want customers to be able to see and feel the quality and thickness of the frame and steel, but also to be able to ‘kick the tires’ within a virtual reality tour.”

If your small business is interested in completing a virtual reality project, the North Dakota Trade Office has a limited amount of grant funds that may cover up to 75% or $3,000 of the project. Click here for details.

Gates Manufacturing’s virtual reality tools can be found on their website, www.gatesmfg.net. For more information on Be More Colorful, visit www.bemorecolorful.com.