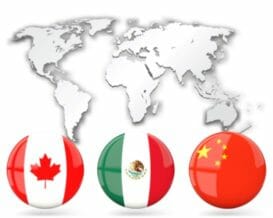 Updates on US-Mexico-Canada Agreement and Trade Dispute with China

The United States-Mexico-Canada Agreement and the trade dispute with China continue to dominate national and state trade news. Trade relationships with the three nations came under increased scrutiny in early 2017, resulting in tariffs, negotiations and trade officials on all sides hoping for a conclusion in 2019. Here’s the latest on trade agreements with Canada, Mexico and China, and what’s to come.

The United States-Mexico-Canada Agreement (USMCA) has been signed by leaders from all three countries and is now pending approval from members of U.S. Congress and their counterparts in Mexico and Canada. USMCA is an updated version of the 25-year old NAFTA and includes new country of origin and labor provisions within the automobile industry, increased access to Canada’s coveted dairy market, the elimination of an automatic downgrade of U.S. wheat in the Canadian market, increased copyright term lengths, and a sunset clause that suspends the agreement’s terms after 16 years. Also included are new provisions detailing IP protection and technology information security.

Remaining unchanged are zero tariffs on food and agricultural products. All tariffs that were at zero under NAFTA will remain at zero under USMCA.

After an economic impact review and congressional committee debates, USMCA could potentially be signed into law later this spring or early summer. Canada and Mexico must also go through their own legislative processes to sign USMCA into law, which will likely take months of debate and review. Mexico’s newly inaugurated president, Andrés Manuel López Obrador, took office on December 1 and is said to be supportive of USMCA, which may speed things along. The Canadian Parliament may also seek to keep things moving before Canadian federal elections are held in October 2019.

Meanwhile, the trade war between the U.S. and China has paused for the moment, as Presidents Trump and Xi agreed on December 1 to halt any further tariff increases for the time being, temporarily delaying President Trump’s tariff increase on $200 billion of goods. The 90-day truce was worked out over dinner in Buenos Aires with each side agreeing to continue discussions and to set a March 1 deadline for a trade deal.

U.S. Treasury Secretary Steve Mnuchin said the current proposal being discussed reduces the trade deficit and includes commitments on technology, currency and cyber issues. Since the truce, China has begun purchasing American agriculture and energy products once again, although exactly how much is unknown. Chinese and American trade officials will meet again on January 7 for further negotiations.