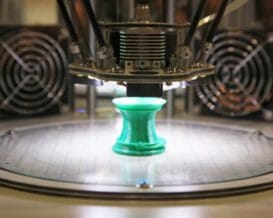 In this series, we examine the impact of the latest technologies on global business. First, we simplified Blockchain and now we’ll discuss 3D printing, also known as additive manufacturing. Three-dimensional printing has been around since the 1980s but only now is the technology and practice becoming increasingly commonplace. Here we provide a snapshot of what 3D printing is and how it may affect the future of global business.

First, what is 3D printing? We’ve all heard the term but do we really know? 3D printing is building a product layer by layer. It’s similar to traditional printing with ink in that both produce fine layers of material atop a substrate. If you printed a document from a conventional printer, put it back in the printer and printed the document again, you would have a second very fine layer of ink sitting atop the first. If you did this over and over again, you could theoretically see the layers of ink rising from the paper, forming a three-dimensional letter.

In 3D printing, you’re substituting the ink with another material – polylactic acid, a bioplastic, is most common. The 3D printer is adding layer upon layer in a design specified by a 3D computer-aided design (CAD) file. The layers stick together and form grooves, spaces and other details as the layers are compiled.

One 3D printer can produce many different objects in different materials, including plastics, ceramics, metal, composites and even chocolate.

3D printing is estimated to be a $30 billion industry by 2022. Opportunities being explored are the design and rapid creation of prototypes, building spare parts on site, the manufacturing of obsolete parts and products, and customizing products as needed.

Less waste is created with 3D printing since items created on demand don’t need the same commercial packaging, warehousing and transportation as mass assembled products. Stores can carry less inventory if they simply have a catalog and print out the items as customers need them. Farmers can print out replacement or customized parts in remote locations. A company with an overseas customer that needs a part may simply email them the 3D CAD file and the customer can print it out at their local print shop.

Independent 3D print shops have popped up around the world and generated an estimated $3 billion in sales in 2017, up 36% from 2016. This figure excludes 3D printing done by the major 3D printing players and their satellite offices. HP is a leader in commercial 3D printing, coming out with its HP Jet Fusion 3D 4200 Printer in 2016 and the upgraded 3200 version in 2017. HP’s Metal Jet 3D printer came out in September 2018 and the company is targeting widespread availability of it by the year 2021. Other major firms in the 3D printing industry are Proto Labs, 3D Systems, Stratasys, Materialise and SLM Solutions Group.

3D printing still can’t compete with the cost advantages of traditional, mass manufacturing on a large scale. But 3D printing has an edge when it comes to some performance design features (such as in aerospace), customization at little to no cost, production on demand and production without local (or even existing) suppliers.