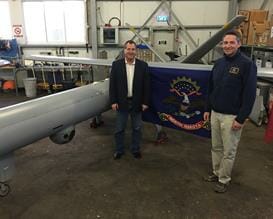 The delegation arrived in Israel  where Wrigley and university representatives met with Haifa-based high technology company Elbit Systems. Elbit has agreed to collaborate with the Northern Plains UAS Test Site and North Dakota State University to fly the first large-scale, high altitude UAS at one of the six UAS test sites in the United States. The Northern Plains UAS Test Site will oversee flying of Elbit's Hermes 450 unmanned aircraft with initial operations focused on precision agriculture research, collecting data to monitor and track chemically resistant weeds, crop stands, nutrient deficiencies and more. The operations with the Hermes 450 will demonstrate a significant step towards full integration of UAS commercial operations within the national airspace system.

"A large-scale UAS operation allows more agricultural data to be collected faster and at altitudes up to 8,000 feet." said Wrigley, who serves as chairman of the Northern Plains UAS Test Site. "We're making important strides in the UAS and precision ag sectors in North Dakota, as well as supplying data to the Federal Aviation Administration in an effort to allow commercial UAS to operate simultaneously with manned aircraft in the future."

Federal Aviation Administration (FAA) regulations require all UAS to be flown within line-of-site of the operators. For this reason, all UAS involved in the upcoming collaboration with Elbit will be accompanied by a manned aircraft. The FAA in December 2013 selected North Dakota to operate one of only six national UAS test sites. In April 2014, North Dakota's Northern Plains UAS Test Site became the nation's first to be FAA certified as ready to begin the work of integrating unmanned aerial systems into the national airspace.

Prior to the Israel segment of the trip, Goehring led a group of North Dakota specialty commodity producers and processors to Cairo, Egypt. Delegates arrived last Tuesday to meet with potential business partners and government officials. Goehring met with Minister of Agriculture Dr. Essam Fayed, to advance possible agricultural opportunities between North Dakota and Egypt.

"They appreciated our efforts to reach out and establish a relationship and were impressed with the quality of crops we produce," said Goehring. "Since the value of the dollar presents a challenge, we have to underline our North Dakota service and the quality of our value-added agriculture."

Egyptian commerce officials indicated opportunities for North Dakota pulses to be sold into Egypt and its neighboring countries for incorporation into traditional foods. Egyptian consumers are especially interested in North Dakota's fava (also known as faba or broad) beans. Egypt is the largest importer and consumer of fava beans in the world, with Canada currently serving as their major supplier. Fava beans are already grown in North Dakota, but information gathered during the trade mission shows great promise for an increase in production.

This is the first North Dakota trade mission to Israel and second trade mission to Egypt. Israel is a highly entrepreneurial country with the largest number of startups per capita in the world. Technological incubators and considerable spending on research and development have further advanced the high-tech industry.  Israel is slightly smaller than New Hampshire, but is populated with over 8 million people. Israelis rely on food and agricultural product imports, as the country's size allows for limited production.

Egypt, has made positive developments in terms of economic reform. Egypt's economy grew by approximately 4.5% during fiscal year 2014-2015 and is forecasted to continue with an expected 5% growth rate during the current fiscal year. Imports of specialty crops peas and lentils have grown considerably since 2012.