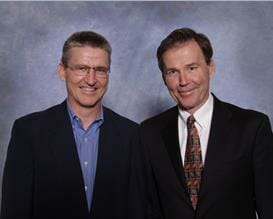 Brian and Howard Dahl grew up amidst a family of innovators and entrepreneurs in Gwinner, ND. Their father, grandfather, and uncles all took part in designing and manufacturing agricultural equipment.  The Dahl brothers followed suit by starting their own companies, first Concord and then Amity Technology, which has become known for its global reach from its headquarters in Fargo, ND.

Amity Technology was founded after the rise of several successful family ventures. Their grandfather, E.G. Melroe, was a farmer during the Great Depression. Out of necessity he began rebuilding his broken down farm equipment using various parts from old machinery. Rebuilding equipment turned into designing his own equipment, assembling it, and selling it to area farmers. He, his sons, and son-in-law Eugene Dahl founded Melroe Manufacturing Company, which sold Melroe’s own farming implement designs. It later developed the Melroe self-propelled loader, eventually renamed the “Bobcat.” The company was subsequently sold to Clark Equipment Company, which now does business as the Bobcat Company.

After the sale of Melroe Manufacturing Company, Brian and Howard’s father, Eugene, became CEO of Steiger tractors. Under his leadership, sales went from $2 million to $105 million in 6 years. The company was sold to Case IH in 1986.

Brian and Howard Dahl have taken on the qualities of their forefathers and applied them to their own business practices. A creativity and persistence comes from their grandfather – who did not let losing a leg, financial crises and numerous other setbacks stop him from starting a business in rural North Dakota. Leadership and integrity come from their father – who was guided by asking, “What is the right thing to do?” Together these virtues have allowed Amity to sell over $300 million dollars of product to more than 25 markets around the world over the last decade.

First, they started a company called Concord, with the idea to develop agriculture technology to be used in third world countries to ease hunger and poverty. When that proved to be too lofty a goal, they focused on creating a viable business. The company manufactured Air Drills, used for planting grains and oilseeds. Concord was sold to Case in 1996, and the Dahls started a new company, Amity Technology. Amity began selling the soil sampling equipment and sugar beet harvesters that Case had not been interested in. The name Amity meant “friendship among nations.” From the beginning, the intention was to have an export friendly company.

Amity took particular interest in Russia and the CIS countries. Two of their shareholders were brothers from Canada with Russian roots. The shareholders’ father and mother had fled Russia during the time of Lenin and Stalin, respectively. When the brothers visited Russia during Gorbachev’s time of glasnost, they observed farms much larger in size than those in North America. They recognized a great potential for Amity’s large sugar beet equipment.  Amity began selling into the region in 2001 and has since built a strong network within Russia and the CIS countries.

Exporting to Russia did not come easy. The process involved a great deal of time spent in-country and “some bumps and bruises along the way,” said Brian Dahl, who has taken about 16 trips to Russia and Ukraine. Amity’s Export Sales Manager Casey Bryl has been to the region more than 40 times, and Howard has traveled to Russia around 70 times.

In Russia, doing business is about gaining trust. According to Bryl, that trust is gained in the same manner as anywhere else. “It’s about honesty, doing what you say you’re going to do, being transparent in business dealings, and understanding the country’s culture and business etiquette,” said Bryl. “Also, you’ve got to be over there. You’ve got to get in the airplanes.”

Amity will go so far as to take last minute trips when a customer’s equipment has broken down. Amity manufactures their product, and on the rare occasions when a customer is not able to source a specific part through their dealer network, Bryl will deliver the part himself. “With farming, time is money. So occasionally I’m traveling with a hydraulic motor in my suitcase.”

Understanding the culture and history of the market you’re exporting to is important to Amity. Russia’s privatization in the 1990’s was a pivotal time period. A person’s approach to business will often be influenced by whether they grew up during Soviet times or afterwards. Amity puts great effort into appreciating such past experiences. Bryl explained, “You must understand a country: where it came from, where it is today and where they perceive it going.”

That understanding deepens as business is conducted in the national language. Amity’s management has learned Russian and attempts to use it as much as possible. For Bryl, this has created a few humorous situations. During a meeting with an agroholding company in Russia, Bryl was trying to speak as much Russian as he could to the head of the company, who was sitting across from him. Bryl proceeded to tell the agroholding company’s team and their leader – in Russian –that Amity Technology’s sugar beet harvesters do an excellent job of harvesting corn. There was a pause while the group contemplated this before the head of the company, who was normally very proud and stoic, broke into a smile and chuckled. Bryl’s interpreter let him know what he had accidently said. This worked in Amity’s favor as the agroholding company knew Bryl was trying his best, and they appreciated that.

Amity has taken some risks in the process of building a customer base. After taking time to build a relationship with a customer, they would occasionally extend credit to an individual based simply on their character. It was a calculated risk. “We found people that we deemed to be trustworthy,” said Brian Dahl. “We leveraged that relationship and potential customers saw that we were honorable people with integrity.”

Naturally, some mistakes were made along the way. At one point they had made a verbal contract with a small European company. Amity provided them with contacts and helped establish them in the air seeder business. After achieving great success, the European company abandoned the verbal contract. The lesson learned, beyond the disadvantages of verbal contracts, was that a company needs to protect their relationships and not freely offer such valuable contacts.

Amity still freely offers advice to exporters, however. They emphasize the importance of meeting potential buyers face-to-face, and only relying on Skype and email once you’ve firmly established customer relationships. Also keep in mind that even if there is a demand for your product overseas, you may need to do some modifications to make it exactly what customers want. You may have to invest in engineering to tailor your product for the market. Exporters should also make use of Ex-Im Bank’s credit insurance to decrease risk exposure. Amity’s management stresses the importance of dealer development, as well. As a manufacturer, Amity needs their dealers to be able to do sales, parts, and service.

These steps have proven crucial to Amity Technology’s success and ability to weather the storms. They have lasted in Russia despite the currency crash in 1998 and the financial downturn of 2008-2009. They will survive the current economic strain in Russia and Ukraine, as well. As the Dahls have learned from previous generations, some difficulty is just part of the path. “We’re positioning the company to go long beyond us,” said Brian Dahl. “We have no intention of selling.”