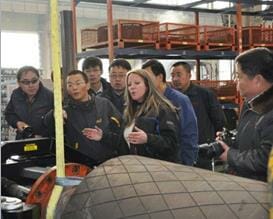 Tamara Somerville is about to leave for Antofagasta, Chile. She’ll be working at the country’s massive copper mines with one of the largest copper mining companies in the world. She will be solely responsible for helping them select large bearing and gear pullers that will repair their heavy machinery. But Somerville does not feel any pressure. In fact, she’s going to enjoy it. “It’s going to be fun! Every trip is just a new adventure.”

Attribute it to experience. As Posi Lock Puller’s corporate vice president and president of global initiatives & strategic alliances, Somerville has nearly 20 years of experience in international trade. She spends mid-August through May of each year traveling the world, helping customers, and training distributors on her company’s manual and hydraulic pullers. Pullers remove gears, bearings, pulleys, wheels and other press fit items from any type of machinery. To Somerville, the type of equipment being used doesn’t matter. “If there are moving parts, it will need to be repaired.” That’s where pullers come in – safely removing the necessary parts for repair or to obtain access to further parts without damaging the surrounding components.

Posi Lock was founded by Tamara’s father, Dean Somerville, in 1974. As a farmer and machinery repair shop owner, Dean needed a universal puller that could remove bearings and gears quickly and safely. Not one to sit idly, he and a friend created their own design that included a metal “safety cage” around the jaws that held them in place. They had it patented, and after retaining a marketing firm out of Fargo, the puller gained in popularity and was featured in trade magazines including Popular Science and Popular Mechanics. However, the company took a blow in 1984 when their McHenry, ND manufacturing plant was completely destroyed in a fired. Undeterred, operations were moved to Cooperstown, ND, where they remain today. In 1994 Tamara left her finance job in Florida and moved back home to join the family business. She found ways to improve Posi Lock’s sales and open up international markets. Since then, Posi Lock has won numerous awards including the Export Achievement Certificate from the U.S. Department of Commerce in 2002 and the North Dakota Small Business Exporter of the Year award in 2013.

Achieving such exporting success took a great deal of time and effort. Posi Lock began exporting when the Internet was in its infancy. Getting into an international market meant scouring trade magazines for leads and making cold calls. Somerville’s first international trade trip was to Mexico City to attend a trade show and visit with a distributor group. It was a rough introduction to foreign travel when her visit came on the heels of an earthquake, and she was welcomed to her hotel room with pieces of the ceiling falling on the bed. But the hospitality of the country was enough to keep her traveling.

Her first inhospitable experience happened in Germany. She was on a multi-country trip to meet up with new and potential distributors. She decided to make a stop in Germany, despite knowing that a domestic company already dominated that market. She met with a potential distributor and says her first mistake was to try and make small talk with the man. In general, Germans business partners are not big on small talk, preferring to practice restrain and remain private. That is in high contrast to Somerville’s personality, which is boisterous and animated. “In Germany they’re very stoic and politically correct, and I was anything but correct,” said Somerville. The visit went disastrously when the man wouldn’t look at or talk to her. “I thought to myself, should I just leave now? Back then, I felt devastated.” Now she is sure to research a country’s culture before she travels there. She’s also learned that rejection is just a part of life, and not to take bad business experiences personally.

Somerville’s advice to new exporters includes accepting rejection, not being afraid, and remembering that “people sell to people. Everyone is just another human being like you or I.” Her advice particularly applies to female business travelers, as she is very experienced in working within male oriented cultures such as China and Turkey. Business partners within these cultures are often surprised to find a woman leading the Posi Lock company and sales team. She takes that into account during these visits – practicing patience when male workers try to test her knowledge, or take days before they’ll engage in a conversation with her.

Posi Lock’s perseverance in the international marketplace has paid off. Since Somerville started traveling, Posi Lock has shipped to an astonishing 80% of countries in the world. They export to about 20 countries on a regular basis. Posi Lock works to develop new products and specialty items while striving to keep the customer the priority. Somerville will often visit customers individually, even when that means traveling to distant mining sites and braving rustic conditions.

But for now, Somerville is off to her favorite part of the globe, Latin America. She’ll be in Mexico before her business trip to Chile. After that she’ll be in Panama and then Rome, Italy for the European Power Transmission Distributors Association’s committee meetings. Somerville wasn’t content to simply join the association, she decided to be on a committee because, in line with Posi Lock’s mission, “I always need to do more.”