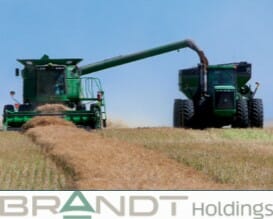 Brandt Holdings sells agricultural machinery, but they consider themselves to be in the people business. Their goal is to serve the unique attributes of each of their employees and customers as they offer John Deere equipment. The company has stayed true to their common core values of integrity, openness and commitment as they’ve expanded into 21 countries over the last 10 years.

Brandt Holdings was founded in 1992 when owner Ace Brandt began diversifying his family’s agribusiness ventures. Brandt had managed the family farm since he was 18 years old, after the passing of his father in 1979. The company purchased its first John Deere store in South Dakota in 1993, with additional agricultural and industrial equipment stores opening over the years in North Dakota, South Dakota, Minnesota, Nebraska, Iowa, Connecticut, Massachusetts and New York. The company’s industrial division offers Vermeer® equipment and Yanmar diesel engines. Brandt Holdings also has real estate and entertainment divisions that are comprised of the Urban Plains Development project in Fargo and the Fargo Force hockey team.

The agricultural division took on exporting in 2006 in order to meet the growing global demand for economically priced agricultural equipment. It was a win-win situation as Brandt Holdings had an extensive inventory of used machines. Their first trip overseas was in 2006 on a trade mission to Russia, Kazakhstan and Ukraine led by then Lieutenant Governor Jack Dalrymple.

“Our approach to each country has been quite different and has changed over the past 10 years,” said Anthony. “It varies depending on the customer’s approach, and we try to synchronize to that.”

Brandt Holdings predominantly exports to Eastern Europe, Russia, South America and Africa. The company’s customers come from farms and enterprises of all sizes. Brandt Holdings has been very active in bringing people to the U.S. in order to tour dealerships, show them the quality of the equipment, and provide training sessions. A valuable component to the trainings has been time spent at a disassembly and containerization center, where customers are able to see how the equipment is broken down and put into a container. This gives the customer a deeper knowledge of the product and the training to assemble it when it reaches its destination overseas.

The company has built such a high level of confidence with some customers that they trust Brandt Holdings to choose the equipment that they need. Anthony says this is a result of their international business model, which mirrors their business model at home. They look to foster an environment for success by surrounding themselves with the very best people, products and service offerings. For Anthony and his team, this translates into lifetime relationships and long term business cycles.

Within the company, Ace Brandt is said to place a great deal of trust in his employees with the expectation that that confidence will be reflected in interactions with customers. A former senior vice president, Roger Olson, used to have a well-known saying at the company – “Not everybody belongs in a 42 regular blue coat.” Brandt Holdings prides itself on empowering their employees by respecting their individuality and striving to bring out each person’s skills.

Anthony says the company has not let size and scale change their core values. “We’re not a flashy company, we just come to work every day and enjoy being in the John Deere business.”

Recent political and currency issues, including the strong dollar and unstable foreign currencies, do not faze Brandt Holdings as they realize business is cyclical in the long term. In fact, Anthony believes that agriculture has taken on a new breath of life and become more interesting than ever. Precision farming has allowed farmers to become increasingly efficient and technology has attracted young people back into the industry.