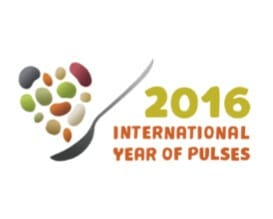 Celebrating the 2016 International Year of Pulses

The 68th United Nations General Assembly has declared 2016 to be the International Year of Pulses. The Food and Agriculture Organization of the United Nations (FAO) was tasked to spread the word about the nutritional and economic benefits of increased pulse consumption. Pulse is the term for the edible seeds of legumes – which are plants with a pod – and includes dried peas, beans, lentils and chickpeas. The North Dakota Trade Office is spreading the word about pulses through our Specialty Crop Program events and trade missions, as well as with our relationships with pulse growers and associations.

Pulses are a nutritionist’s dream food – a low-fat source of protein (double that of wheat) with a high fiber content and plenty of vitamins and minerals. Pulses help lower blood cholesterol and regulate blood glucose. They’re an excellent choice for people with diabetes, coronary conditions, celiac disease, or for vegetarians in need of additional protein.

Pulses also make environmentalists happy. Growing pulses leaves the soil in better quality than before they were planted by leaving behind nitrogen and other beneficial crop residues. They require less fertilizers than other crops and have lower carbon and water footprints than other protein sources.

“We’ve seen an increased interest from food manufactures overseas,” said NCI food scientist Natsuki Fujiwara. “This is seemingly pushed by rising healthy eating trends to some extent, even in the developing regions of the world.”

Pulses are becoming increasingly important in Southeast Asia, according to Fujiwara and NCI director Mark Weber.

“In Southeast Asia, there’s been a tremendous interest in using pulses in snack foods,” said Weber.

The Northern Pulse Growers Association is a regional organization that strives to increase pulse consumption, as well. They represent growers from North Dakota and Montana, and allocate funds distributed by the North Dakota Dry Pea and Lentil Council. They support growers entering the international market by providing education, research and marketing expertise. Their website offers news and information for growers, along with a pulse cookbook, baking guide, and kids’ activities.

In developing countries, pulses are typically grown by small scale farmers for their own use. However, if a small scale farmer can produce excess crop, they can sell it locally and frequently fetch a higher price than cereal crops. Pulses contribute to food security as a source of inexpensive protein that can keep for several years without refrigeration if properly stored. The pulse seeds can be kept for long periods as well and planted in future growing seasons. Some pulses, such as pigeon peas, bambara beans and lentils can be grown during droughts and in arid climates with erratic and limited rainfall.  Furthermore, the proteins in pulses are high in lysine and low in sulfur-containing amino acids which, when combined with grain, provide the body with a higher quality protein that more efficiently meets the body’s protein needs. This greatly improves the nutrition of populations that do not have easy access to meat or fish. These unique characteristics of pulses contribute to the decrease in hunger that we’ve seen over the last 20+ years. Yet 1 out of every 9 people in the world is still undernourished according to the FAO.

As part of the International Year of Pulses steering committee, the Global Pulse Confederation has a plethora of information on the benefits of pulses, events, news, and even lesson plans and fun visuals for children. Social media has heightened pulse awareness with #PulseFeast and #LovePulses trending on Twitter earlier this year, as well as the UN’s LovePulses pages appearing on Instagram, Vine, YouTube and Facebook along with pictures of delicious looking dishes that would make anyone want to include more pulses in their diet.

The International Year of Pulses activities have served as a kick-off towards a lasting, increased awareness and use of pulses. Pulses.org will serve as the home for the global pulse brand and industry from 2016 on, with a large focus on recipes. This database of recipes, organized by the Global Pulse Confederation, emphasizes using pulses in your favorite foods to boost the nutritional value. Anybody up for some black bean brownies?