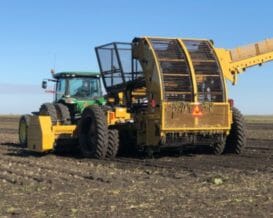 O’Hara is a diesel mechanic and welder by trade. He found himself in sales when his knowledge of mechanics combined with an ease of communication made him the go-to guy for explaining how things work. O’Hara’s unexpected career in sales is reminiscent of the unexpected success found by the original owners of the company, the Lepine brothers, two skilled metal smiths who repaired ships for the US Navy during WWII.

After the war, Joe and Ted Lepine returned to their families in Fargo and began Standard Industries, a metal fabrication business. Business was slow to start, and Joe used the downtime to build a metal sled for his son Jim and take him sledding on the hills at Island Park. It was there that a man approached them and asked where they’d found a metal sled, with such materials for toys being scarce following the war. The man’s name was Fred Scheel and he wanted to sell the sleds at his store, Scheels Hardware. The Lepine brothers built many sleds for Fred Scheel and earned the much needed income to carry two families through winter, and lift their metal fabrication business off the ground.

Today the company manages two sides of the business: metal fabrication and agricultural equipment. The metal fabrication side makes custom equipment for large enterprises including American Crystal Sugar, Minn-Dak Farmers Cooperative and Cavendish Farms. The agricultural equipment side designs, manufactures and sells their own line of sugar beet equipment and other ag machinery. The two sides balance each other out – when one market slows down the other is usually picking up speed.

The metal fabrication side of the business is currently up, said O’Hara, although they’ve struggled with the tariffs placed on steel and have had to increase prices. Still, they’ve created a policy of only passing on a fraction of the increased cost to the customer.  It also helps that the price of sugar is down in Europe, causing farmers there to turn towards U.S. equipment as it’s lower in price than European style machinery.

Alloway Standard Industries turned to exporting over four years ago to take advantage of the largest sugar beet producers in the world, Russia and France. O’Hara has been deepening his knowledge of exporting as until recently, he primarily dealt with domestic sales.

“With exporting it takes money to make money, because if you’re not spending money you’re never going to make it,” said O’Hara. “You have to build the equipment, bring it over there and show them that it works.”

“It’s a different style over there. The government has a bigger role – they’ll mandate how many times you can spray and they’ll subsidize the equipment.”

A new product line Alloway Standard is marketing both here and abroad is their line of strip till machinery, which is well-suited for the organic farming market. Organic farming involves no chemicals after the seeds are in the ground, which presents the problem of weed control. If a machine can strip till only where they’ll plant, that leaves space where a row crop cultivator can come in and pull up the weeds. It’s Alloway Standard’s own design and they’re currently introducing the products to organic farmers.

During his down time, O’Hara can be found helping with machinery design alongside the engineers and research and development teams. Granted, down time is hard to come by these days. Once the frost melts, O’Hara will be out in fields across the Red River Valley demonstrating equipment, then flying out to Idaho to attend the sugar companies’ annual meetings, followed by a winter’s worth of marketing and trade shows.

Luckily, he’s having a great time doing it.