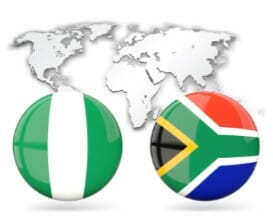 Nigeria is challenging South Africa’s title as the economic leader in Africa. Nigeria has recently reexamined its massive economy, and is looking to diversify and make changes that will appeal to investors. Agricultural development is at the top of the list.

On April 6, 2014, Nigeria took the lead away from South Africa as the continent’s largest economy. Nigeria did not gradually overtake South Africa, in fact they took a giant statistical leap in terms of gross domestic product (GDP). The CIA World Factbook estimates Nigeria’s 2015 GDP using purchasing power parity as $1.1 trillion. The same estimate for South Africa is $724 billion.

Nigeria finally adjusted their method of calculating GDP after 24 years – a task called “rebasing” that other wealthy countries typically do every 5 years. Nigeria’s new method includes their movie making revenue – an industry that hadn’t been included before. “Nollywood” was valued at $3.3 billion in 2014 (a large chunk being pirated sales) and the industry is the second largest employer in the country after agriculture. The new “rebasing” also takes the telecommunications industry into account – Nigeria and South Africa are the two largest mobile phone markets in Africa.

The statistics highlight Nigeria’s uneven distribution of wealth. The country’s income has been sourced predominately from oil revenue and has been used for the government’s day-to-day activities instead of investment. Decreasing oil prices have created budget shortfalls. Nigeria is now seeking financial aid from the World Bank and African Development Bank, and appealing to Saudi Arabia and Qatar for investment in agriculture and mining.

Last week on February 24th, President Muhammadu Buhari said in a statement that with the decline in revenue from crude oil exports, Nigeria’s hope of economic resurgence lies in the rapid development of its agricultural and solid mineral resources. Buhari said his administration is committed to increasing agricultural productivity.

Buhari won the presidency in May 2015 on a campaign of anti-corruption, security, and employment generation. He has restated his zero corruption policy since.

As Africa’s most populous country, with English as the official language and a focus on agricultural, Nigeria could be a future opportunity for North Dakota exporters.