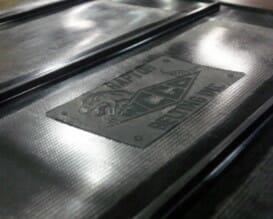 WCCO Belting, a seasoned exporter and the only North Dakota company to have received the Presidential “E Star” Award for Export Success, has its roots in a basement shoe repair business. From a one man show to employing more than 250 people at two locations today, WCCO Belting has won over customers nationally and internationally. A refocus on export opportunities in 2002 turned the company into a multi-million-dollar rubber products manufacturer that generates more than 50% of its sales from customers located outside of the United States. WCCO now sells into over twenty countries.

In 1954, Edward Shorma purchased the Wahpeton Shoe Hospital with $1,500 raised by mortgaging his car. He soon branched out, using his cobbler skills to repair tarps for farm trucks. Next came work using additional materials – canvas, wood, metal and rubber – to solve the various problems presented to him by customers. He used his natural ability to innovate equipment, and pursue the materials needed according to his son, Thomas Shorma.

“He’s probably the best engineer I’ve ever met,” said the younger Shorma. “Not by formal training, but by understanding how to design and make products, and how those products will fit into the market.”

The company found their calling in 1973 when Canadian farm equipment supplier MacDon Industries asked for a quote on original equipment canvas belting. They fulfilled the order and have been manufacturing equipment belting and other specialized rubber products ever since.

The making of rubber products started off as a division of WCCO, an acronym for the Wahpeton Canvas Company. In 1992, the division was split off and sold to Edward’s children, who continued with the stand-alone company of WCCO Belting.

WCCO Belting provides belting solutions for the agricultural, industrial, construction and recycling industries. They create custom products using a variety of fabrics, designs, textures and methods of construction. The company uses customized rubber extruding equipment to create different sizes, shapes and styles of cleats on the belts. All belts go through a proprietary single-step vulcanization process called Truhesion that permanently bonds the rubber to the fabric. Both the rubber and fabric are supplied through the Arlington-based CSI Calendering, Inc, which WCCO Belting acquired in 2006 after deciding to vertically integrate.

WCCO Belting maintains family ownership with seven of the eight Shorma siblings sharing the company. Thomas Shorma recalls the early days of working with his siblings.

“We all grew up working in the business, that’s just what you did in those days,” he said. “We filled in wherever we were needed, whether that was doing manufacturing, cutting out tarps or drilling slats.”

Thomas went on to graduate from the University of North Dakota with a business management and marketing degree. He worked in marketing at the then-Wahpeton Canvas Company before starting his own consulting business. After ten years of running his consultancy, WCCO Belting’s Board of Directors persuaded him to return in 2002 to jumpstart and expand the company.

Upon his return to WCCO Belting as President and CEO, Thomas Shorma focused on international expansion. Right from the beginning, Shorma was visiting customers in Canada, and within a year he was on a plane to Australia for ten business meetings in nine cities in eight days. Those first markets were determined to be the best approach to exporting as they spoke English and had similar cultures. Still, there were far less resources back then, and the internet wasn’t as strongly used as today. Back in 2002, planning an international sales trip involved a great deal of phone calls, attempts to qualify the buyers and face-to-face meetings to ensure legitimacy.

WCCO Belting began to receive support from the North Dakota Trade Office and the local US Commercial Service office during the mid-2000s, which the company views as vital to their success.

WCCO Belting continued to grow, with Thomas and sales staff traveling extensively to establish the WCCO brand in a variety of markets. Some had more barriers to entry than others. South America was a market that the company had been keeping an eye on for quite some time. WCCO Belting’s first trip to Brazil was in 2006, where they learned that Western agricultural technology had not yet taken hold. Over the years, they watched as the area’s agricultural industry grew, new land was made ready for its first harvest, and technology was embraced.

It was a multi-year process to build their South American customer base. Trying to overcome Brazil’s protectionist policies was a heavy feat. The company was required to demonstrate that their product was unique to the market. Without a similar product made in Brazil, a company can avoid high import duties.

WCCO Belting continues to focus on growing its partnerships with South American distributors and OEMs, establishing its brand, and promoting its internationally registered and trademarked product, RAPTOR® Draper Belting.

Thomas notes that if a company truly wants to be global, they must protect their product or intellectual property as much as they can. He says that the patent and trademark process is timely and expensive, but worth it.

A company must also regularly visit its dealers and partners around the world. An array of WCCO employees, from executives to salesmen and engineers, have spent a great deal of time traveling to develop strong relationships with foreign customers. And Thomas says that no matter how many times you’ve been to a country, there are always challenges.

“Every trip is a chance to learn and grow,” said Thomas. “You just have to go with the flow and expect the unexpected.”

He recalls a recent trip to China to visit suppliers. It was their 20th trip to the country in ten years. On this trip, they diverged from the norm and decided to check their bags. Their flights were plagued by delays and they ultimately ended up in China behind schedule and without any luggage. They remained undiscouraged and attended three days of meetings with Chinese partners wearing the same clothing that they had arrived in. Their luggage finally arrived shortly before their departure back home.

When asked about his proudest moment so far with the company, Thomas brings up his employees. He attributes the company’s accelerated growth to engaged, dedicated employees. Many of WCCO’s team members have been part of the company family for over twenty years, including a gentleman that has been with the Shorma family for 45 years. He says that type of commitment to a company is rare.

“We would not be where we are today without the hard work and loyalty of these people,” he said.

Thomas and company’s dedication was rewarded when they received the President’s “E Star” award in May 2016. The award comes after receiving the prerequisite presidential “E” award in 2010. As a recipient of both awards, WCCO Belting has achieved ten years of continuous export growth.