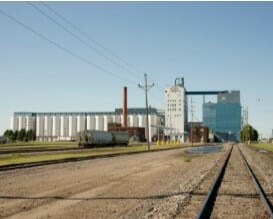 The North Dakota Mill has been grinding flour and adding to state coffers since 1922. The only state-owned mill in the nation is also North America’s single largest milling operation. The mill sells the highly recognizable “Dakota Maid” brand amongst many other products within wheat markets both here and abroad.

The creation of the North Dakota Mill came after a long fight, beginning in 1887, from the then-territory’s farmers to avoid the grain monopolies in Minneapolis. Following several decades of lawmakers failing to pass a bill concerning a state terminal elevator, success was finally found in 1919 when the Nonpartisan League led voters to approve an amendment establishing the North Dakota Mill and Elevator Association.

First a flour mill in Drake, ND was purchased, but it closed in 1924 due to unprofitability. A Grand Forks location had also been selected, but a lack of funds and a government changeover delayed its construction and opening. Finally in 1922, the mill was complete and North Dakota farmers had their local, value-added market for wheat. But due to further politics and mismanagement, it didn’t become profitable until the late 30’s.

Since then, several bills have sought to dissolve the state-owned facility, as recently as 1967, but none have moved forward. Devastating fires in 1969 and 1970 halted operations, but the mill rebuilt and resumed operations after 18 months.

The North Dakota Mill now reaches profits into eight figures. In 2011 and 2015, the mill achieved record profits of $16.1 million and $16.7 million, respectively. Each fiscal year, five percent of its profits go to North Dakota’s Agricultural Products Utilization Commission and half of the remaining profits go into the state’s general fund. The rest stays at the mill to fund capital projects, such as the $27 million-dollar expansion that was completed late last year. That expansion created the new “G Mill” wheat flour milling unit, allowing an additional 7.5 million bushels of spring wheat to be purchased and processed into flour per year.

The North Dakota Mill adds value to 34 million bushels of spring and durum wheat each year. They clean, process and mill North Dakota wheat and durum; provide storage to farmers, country elevators and government agencies; and ship products out on bulk rail cars, boxcars and trucks.

The mill has close to 300 different products, which are mainly variations of spring wheat flour, whole wheat flour, durum semolina and durum wheat flour. The company has a strong domestic market and has also sold product overseas for quite some time. They began to move further into international markets around 2006.

“We have always exported small amounts of flour out of the mill,” said Vance Taylor, the mill’s president and general manager. “But we developed a stronger focus towards exporting after the Trade Office was formed and we’ve been able to increase our exports and develop new markets.”

The North Dakota Mill has found a winning market in South Korea where they sell organic spring wheat flour. Taylor credits patience and repeat visits to the country with bolstering their exports.

“It wasn’t easy. It can require a process of one to three years from start to finish with a potential new account to make a sale,” said Taylor. “In Asia, they like personal, face to face contact. We try to see our accounts at least once a year.”

The mill has doubled in size under Taylor’s leadership and the number of employees has gone from 130 in 2000 to the present 152 employees.

“The premium that North Dakota wheat flour provides is not only the added nutritional value, but an optimal end result is achieved with the flour,” said Storbakken. “A superior end product and an increased yield results, due to the wheat flour’s absorption rate.”

The mill’s sales have an upwards trend line, though the company must contend with the continuously volatile wheat market. The volatility of the wheat market and transportation costs have a direct impact on export sales. The North Dakota Mill relies on the quality of their wheat flour to make sales, rather than being the lowest price.

“Many businesses are price conscious and will seek alternative sources during a bullish market,” said Storbakken. “When they don’t achieve the same end results that our flour produces, they tend to seek quality over price.”