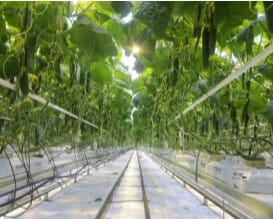 There’s been a lot of buzz about indoor farming. Indoor farming, or vertical farming, is said to be another step towards being able to feed the 10 billion people expected on our planet in 2050. Although many vertical farming companies have tried and failed, indoor farms in the U.S., Netherlands and Germany are finding success – and record amounts of investment – by using the latest in agricultural technology.

A California start-up called Plenty uses “growing towers” inside of warehouses to grow crops. The towers are 20-foot tall columns that grow the plants sideways, supplying them with water and nutrients fed from the top using gravity. There is no sunlight involved, only pink and purple LED lights. The soil is not dirt but a bedding made from recycled plastic bottles. Infrared sensors and cameras monitor and measure the temperature, moisture, humidity and growth. Artificial intelligence is used to get the plants exactly what they need and no more. There are even small robots that transplant seedlings so a human doesn’t have to grapple with the dense plants. It’s a design that is expected to be repeated in Asia and the Middle East.

The benefits of indoor farming are clear. Indoor space allows a farmer to control the “weather” – there are only bright, sunny days on an indoor farm. And no arable land is needed, which is a huge issue in many parts of the world, such as China. China’s arable land comprises only around 12% of its total area, not enough for its 1.4 billion people. Japan and the Middle East suffer from the same problem.

Much of the recent buzz about indoor farming is the amount of investment it has received. In addition to Jeff Bezos’ investment firm, Bezos Expeditions, Plenty has received funding from Japanese technology company SoftBank. Softbank invested $200 million in July 2017, which was the largest agriculture technology investment ever at the time (in December, Investment Corp of Dubai surpassed that with an investment of $203 million into Boston-based Indigo Ag).

The hope is that indoor farming operations will cut down on so called “food deserts” – areas with limited access to healthy and affordable food sold in supermarkets and grocery stores. It’s an increasing problem within large cities according to the USDA.

The U.S. isn’t the only player in indoor farming. The Netherlands has been a leader in indoor agricultural innovation for years. Half of their land’s area is used for agriculture, with sprawling greenhouses measuring up to 175 acres each. This has allowed the Dutch to become the top exporter of potatoes and onions and the second largest exporter of tomatoes and vegetables by value. In addition, a third of the world's vegetable seed comes from the Netherlands.

A startup based in Germany and Italy is manufacturing vertical farms about the size of your refrigerator. Neofarms says it will cost customers about two euros per week in energy costs to grow salad vegetables at home using their product. Such small scale growing operations are said to be in supermarkets in the future, where consumers will be able to purchase their vegetables from miniature vertical farms within the store.

You won’t see indoor wheat fields anytime soon. For now, vertical farms are primarily focused on leafy greens and herbs. Other crops would require much more light, which would drive costs up.

Vertical farming isn’t considered to be the solution to feeding the world, but rather an additional technology for use in the agriculture industry. After all, everybody can only eat so many greens.