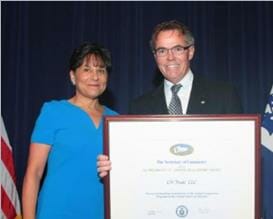 A local company was among 65 U.S. firms that received a national award Wednesday for contributing to the expansion of U.S. exports.

The Fargo company handles international sales and distribution for Midwestern manufacturers, as an outsourced sales department.

“The ‘E’ Awards Committee was very impressed with CH Trade’s broad base of services provided to exporters. The company’s work to support trade events was also particularly impressive,” U.S. Secretary of Commerce Penny Pritzker wrote in a congratulatory letter.

CH Trade was founded in 2003 by Chris Harris, who had worked for Microsoft Business Solutions and ICL/Fujitsu.

“It is crucial for American manufacturers to develop international markets, but many companies do not have the manpower or expertise to do this themselves,” Harris said in a news release. “Our mission is to make connections and foster demand internationally for our clients’ products.”

The “E” Awards were created by President John F. Kennedy. This is the 52nd anniversary of the awards presentation. The ceremony is a highlight of World Trade Month, according to the Department of Commerce.