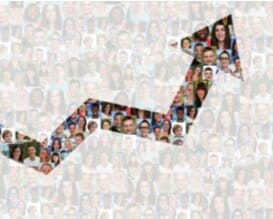 Where is the Middle Class Growing?

The global middle class is currently experiencing the most rapid expansion the world has ever seen. As middle class populations grow, so does their desire for choices, high quality goods and better service. These areas are where North Dakota companies shine and why middle classes around the world are a target market for many North Dakota companies. A recent report by the Brookings Institution provided an update on this unprecedented growth, with findings as follows.

The report updated earlier this year by Homi Kharas has revealed that there were about 3.2 billion people in the middle class at the end of 2016, 500 million more than he estimated in his 2010 report. The rate of increase of the middle class is roughly 140 million new entrants each year and that rate could increase to 170 million in five years. Kharas hypothesizes that in 2-3 years time, for the first time ever, the majority of the world’s population will be considered middle class or wealthy.

Asia is home to the majority of the emerging middle class. About 90% of the next billion new entrants will be Asian: 380 million Indians, 350 million Chinese and 210 million other Asians. In comparison, North American and European middle class numbers have stalled.

The middle class is made up of two groups – a slow-growing population in developed countries and a fast-growing middle class in emerging economies. The fast-growing, new middle class seeks to buy durable goods and services including tourism, entertainment, health, education and transport.

One thing is different about the paths these new emerging middle classes are taking – a lack of well developed public programs supporting them. At the point that the economies of India, Indonesia and China are at right now, Germany already had social insurance for all workers, the U.S. had passed the Social Security Act and Britain had introduced the National Health Service. According to a World Values Survey (2015), new middle classes do not want to pay more taxes in order to receive these services. New emerging middle classes do not believe that the government is responsible for their success. Rather they believe their own thrift, hard work, determination and perseverance has increased their well-being – something to consider as an exporter pursuing business in these markets.