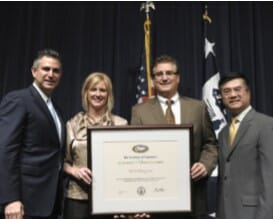 WCCO Belting Inc., a rubber conveyor belt manufacturer based in Wahpeton, has been awarded the Presidential "E" Star Award for Export Success. It's the highest honor any U.S. entity can receive for making a significant contribution to the expansion of U.S. exports.

The award was presented by U.S. Secretary of Commerce Penny Pritzker at a ceremony held Monday, May 16, in Washington, D.C., during which Pritzker honored 123 U.S. companies.

"WCCO Belting has demonstrated a commitment to export expansion. The 'E' Awards Committee was very impressed with WCCO Belting's adaptation of its product line and development of new products for exports," Pritzker wrote in a letter announcing the honor. "The company's commitment to cross-cultural communication was also particularly notable. WCCO Belting's achievements have undoubtedly contributed to national export expansion efforts that support the U.S. economy and create American jobs."

WCCO Belting engineers custom product solutions for the agricultural industry for crop preparation and harvesting applications and for the industrial industry for material handling operations.

WCCO began focusing on export opportunities in the early 2000s, and received an "E" Award in 2010. Its No. 1 export today is the RAPTOR Draper belting used on combine harvest header equipment. WCCO currently ships to over 20 countries.

The family-owned business was founded by Edward Shorma in 1954. His son, Thomas Shorma, currently serves as the company's president and CEO.