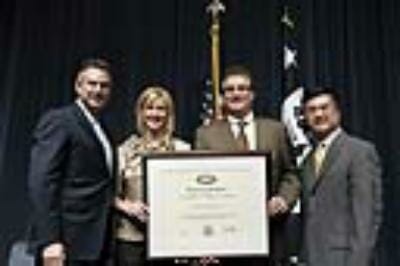 Thomas Shorma, president and CEO of WCCO Belting Inc., and his wife, Julie, accepted the company's "E" Award during an awards ceremony at the U. S. Department of Commerce.

"President Obama's National Export Initiative goal of doubling U.S. exports and supporting 2 million jobs over the next five years has raised the profile of the importance of exports to our nation's continued economic recovery," Locke said. "WCCO Belting is being honored today for its achievement in enhancing export growth which helps strengthen our economy and create American jobs.

"I want to congratulate you on your achievement, and for supporting critical export-related jobs for American workers," Locke said.

WCCO Belting was one of 22 companies or organizations nationwide to be awarded a 2010 "E" Award. The award was established by President John F. Kennedy in 1961 to recognize firms or organizations that contribute significantly to increasing U.S. exports.

WCCO Belting is a leading manufacturer and supplier of rubber belting products used in the agriculture and construction industries. The company's "E" Award represents the culmination of 40 years of building a global business that exports its products to more than 20 foreign countries. WCCO has expanded its Wahpeton manufacturing plant twice in the last five years and has added about 125 jobs since 2008. WCCO's export business has grown from 38 percent of the company's total revenue in 2001 to about 60 percent last year.

WCCO, a family owned and operated business, was founded by Edward Shorma, who in May 1982 was presented the National Small Business Person of the Year award by President Ronald Reagan.