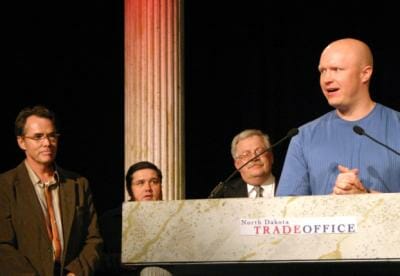 Officials from the U.S. Department of Commerce and U.S. Small Business Administration, presented two national Exporter of the Year awards during the final day of Global Business Connections, a two-day international business conference held at the Ramada Plaza Suites.

“These two companies are a great example to all industry and a principal part of a larger effort in North Dakota to grow our economy and improve our quality of life,” said Susan Geib, executive director of the North Dakota Trade Office.

Roll-a-Ramp is one of only 15 U.S. businesses to receive an Exporter of the Year award from ThinkGlobal-Commercial News USA, the official export promotion magazine of the U.S. Department of Commerce. The West Fargo company, a manufacturer and distributor of portable ramps, won the award in the consumer goods category.

DuraTech Industries was named the SBA’s state Exporter of the Year because the manufacturing company has expanded its export sales into eight new countries and has increased its existing export sales in four others, said Michael Gallagher, the SBA’s Fargo-based district director.

Since beginning its international expansion efforts in 2005, DuraTech has increased its export sales by 42 percent, Gallagher said.

Roll-a-Ramp received its U.S. Department of Commerce award based on its total number of export deals in 2005, the total percentage increase in sales, exports as a percentage of total sales, the company’s innovation and originality in marketing and other factors, said
Colleen Litkenhaus, Deputy Assistant Secretary for Domestic Operations for the U.S. & Foreign Commercial Service.

“Exporting was a big step and important step for Roll-A-Ramp,” said Roll-A-Ramp President and CEO Tom Kenville. “Because we are a smaller company, it allowed us to both open up the world to accessibility, as well as to add to revenue growth.”

About 400 people, including exporters from across the state and international trade experts from around the world, attended the two-day conference. The event was sponsored by the North Dakota Trade Office and its network of international business partners.

“Early feedback from our exporters indicates that the conference initiated some terrific connections we fully expect to further international business,” Geib said.

“Our goal was to recognize some successful exporters who lead by example and to provide valuable international resources,” she said. “Now we’ll continue working to build on our progress.”