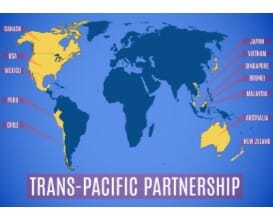 Participants in the Trans-Pacific Partnership (TPP) are moving forward after a stall caused by the U.S.’s withdrawal from the trade agreement in January. Representatives from the 11 participating countries met in Sydney, Australia last week to renew negotiations. While the U.S. is not engaged, its wishes are still being considered.

Without U.S. influence, several revisions have been proposed. As reported by Reuters, Vietnam has asked for changes to labor rights and intellectual property (IP) provisions – two issues pushed by the previous U.S. administration.

Out of fear of another country dropping out, representatives of the 11 remaining countries are willing to make changes to the original agreement to keep everyone on board.

Vietnam would specifically like the IP provisions on pharmaceutical data sidelined. Japan and New Zealand support the change. Originally TPP delayed competitors’ access to pharmaceutical data (keeping cheaper generics off the market) for eight years, which many TPP critics find unnecessary now that the U.S. is not part of negotiations.

But still, many are hoping that the U.S. will change its mind and rejoin the accord in the future. Those forward thinkers do not want to make changes that will be deal breakers for the U.S.

A new draft of TPP is expected at the Asian Pacific Economic Cooperation forum in Vietnam in November.