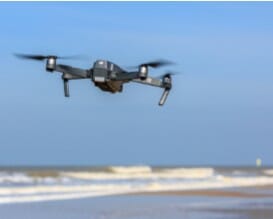 Sky Taxis to Shark Detection – Drones Around the World

Commercial drones can only go up from here. The Federal Aviation Administration (FAA) has estimated that over a five-year period, U.S. commercial drone numbers will grow tenfold from 42,000 in 2016 to 442,000 in 2021 as start-ups and corporations recognize myriad uses for commercial drones. While the FAA works to determine drone regulations, their global use has sped ahead. Goldman Sachs Research has estimated a $100 billion market for drones from 2016-2020, spurred by commercial and civil government use. Here are four unique uses for drones happening right now.

Surfers and swimmers in Australia now have one more layer of safety when it comes to sharks – drones with shark detecting software will begin patrolling over beaches this month.

The drones will send live aerial video from above ocean waters to an operator who will then use the software to detect sharks in real time. The drones, provided by the Little Ripper Group, will warn swimmers of a shark’s presence using a megaphone. A life raft and emergency beacon will also be dropped from a drone when necessary. It is said that shark detection software is accurate 90% of the time and can differentiate between sharks, dolphins, surfers, swimmers and other marine activity.

Zipline International, a start-up out of Half Moon Bay, California, has raised $25 million to expand its delivery of humanitarian products in Rwanda. The company builds drones and creates delivery systems to transport medical supplies to areas inaccessible by land. They already deliver blood on demand to clinics serving 6 million people in the country. Now, in partnership with the Rwandan government, they will expand that reach to all 11 million citizens and offer additional live-saving products including anti-venoms, vaccines and rabies treatments. Orders that used to take two hours via roadway now take 20 minutes.

Drone use took on new meaning when drone manufacturer DJI came out with a report in March stating that drones have saved 59 lives since 2013, based on media reports. From May 2016 to March 2017, 38 lives were saved with drones, or about one life per week. About half were saved during floods, with drones locating missing people and delivering ropes and life jackets. Others were saved by a search drone while missing in mountains or snow.

Animal lives are being saved as well with drones combating poaching in Kenya. Airware seeks to build positive uses for drones and has built and created software for drones to monitor the Ol Pejeta Conservancy, East Africa’s largest black rhino sanctuary and home to the world’s last three northern white rhinos. Airware’s drones fly with an autopilot platform and control software, and send real-time digital video and thermal images to the sanctuary’s rangers. The software helps the rangers track, observe and protect wildlife from poachers both day and night on the 90,000 acre conservancy.

Traveling via drones is the next step, at least for Dubai’s Roads and Transportation Agency. At the World Government Summit in February 2017, the organization announced they will soon begin regular operations with people-carrying drones. Passengers may weigh up to 220 pounds and can be carried for up to 30 minutes. The passenger will choose a destination from an onboard screen and the drone will carry out the operation without further input from the passenger.

If you’ve pictured a passenger dangling from a drone by a tether, you’re not alone. But the drones being used will operate as battery-powered, pilotless sky taxis and will include a seating compartment for one or two people. A design by German start-up Volocopter and China’s Ehang 184 model have both been tested.

Uber and Airbus are currently working on their own prototypes of sky taxis.