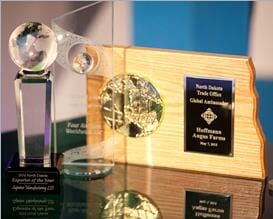 "North Dakota companies are working tirelessly to promote North Dakota products globally, and it's important that we recognize those efforts," said Lt. Gov. Wrigley, chairman of the NDTO Board of Directors. "Companies such as Superior Manufacturing, Four Anchors Worldwide, and Hoffmann Angus Farms serve as examples of hard work paying off; impressive businesses that support North Dakota job growth and contribute to the diversification of our economy."

The Exporter of the Year Award is presented to one North Dakota business each year. To win the award, the business had to expand to a new international market in 2014, increase its export sales during the past year, and support the larger, statewide effort to expand North Dakota's global reach.

North Dakota's 2014 Exporter of the Year Award winner, Superior Manufacturing, began exporting in 2010, though owner Claire Rauser made his start in the grain bin industry much earlier. In 1977, he began pouring concrete for grain bin floors during his NDSU sophomore year. After graduation and a long, successful run as a grain bin dealer using a private "Superior" label, Superior began manufacturing their own line of grain storage, handling and conditioning equipment. Armed with a strategic export plan and a midwestern worth ethic, the company pursued exporting with a remarkable perseverance and dedication to fulfilling the needs of their overseas customers and dealers. They now have an active dealer network that includes 10 countries, with new dealers starting up in 6 additional countries.

The 2014 Service to Exporters Award winner, Four Anchors Worldwide, specializes in placing and servicing cargo insurance on agricultural commodities and equipment. They have made an extraordinary effort to inform and assist North Dakota exporters with transportation insurance risks. Though based in New York state, owner Bob Furjanic has maintained a physical North Dakota presence by speaking at events in North Dakota, conducting webinars for North Dakota businesses, and scheduling one-on-one meetings with our state's exporters. Four Anchors Worldwide's goal is to promote awareness of cargo insurance, support international trade, and facilitate claims resolutions.

The North Dakota Trade Office Global Ambassador recognition is given to an individual or organization that has selflessly assisted in the promotion of North Dakota products worldwide and has helped strengthen the relationships between North Dakota companies and their international partners.

The NDTO Global Ambassador, Hoffmann Angus Farms, has faithfully served as an advocate of North Dakota's international trade for over 10 years. A family-owned and operated farm and ranch, they have been instrumental in advancing North Dakota's Angus cattle industry in the global marketplace by hosting international visitors and North Dakota exporters at numerous events. Hoffmann Angus was the first stop when the NDTO hosted its first delegation from Kazakhstan, which has resulted in the export of thousands of cattle. Their welcoming attitude has made them an ideal destination to introduce trade delegations to North Dakota hospitality and ranching practices.

Approximately 75 people took part in the 2014 Global Business Awards ceremony, which was sponsored by the North Dakota Trade Office and its network of international business partners and held on May 7 at the Hilton Garden Inn, Fargo. The event consisted of a networking reception and a keynote address by Dr. Rod Greder, an innovation consultant and founder of Awear Technologies. For more information, visit www.ndto.com

NDTO is a member-based organization that provides education, research, advocacy, organization and leadership so that North Dakota companies can develop and expand their export business. According to U.S. Department of Commerce statistics, North Dakota's merchandise exports have grown over 429% percent since the conception of NDTO, from $1 billion in 2004 to $5.3 billion in 2014.