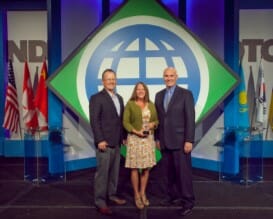 Posi Lock Puller Inc., a family-owned gear and bearing puller manufacturer headquartered in Cooperstown, ND, was named North Dakota's 2016 Exporter of the Year on May 24 for its international expansion and support to the state’s export community. In addition, the North Dakota Soybean Council, a non-profit organization representing soybean farmers, received the 2016 Service to Exporters Award for its dedication to assisting North Dakota soybean companies. Lt. Gov. Brent Sanford presented the awards during the Global Business Awards ceremony, the annual international business event hosted by the North Dakota Trade Office (NDTO).

"It was an honor to present these awards as it’s so important to recognize the professionals who are developing and diversifying North Dakota’s economy,” said Lt. Gov. Sanford, chairman of the NDTO Board of Directors. “Companies such as Posi Lock Puller and the North Dakota Soybean Council are securing the livelihoods of many rural North Dakotans when they expand their international sales and showcase the state’s brand.”

The Exporter of the Year Award is presented to one North Dakota business each year. To win the award, the business had to expand to a new international market in 2016, increase its export sales during the past year, and support the larger, statewide effort to expand North Dakota's global reach.

Posi Lock Puller’s humble origins began in 1974 when Dean Somerville, a farmer and machinery repair shop owner in McHenry, N.D., needed a self-aligning, universal puller that could remove bearings and gears quickly and safely. Armed with ingenuity and a mechanical background, he designed a metal “safety cage” around a set of jaws that could grasp and remove press fit items on any type of machinery. The pullers quickly gained in popularity and despite a fire that completely destroyed its facility, the company continued to grow after relocating to Cooperstown, N.D. Somerville’s daughter, Tamara, rejoined the business in 1994 and focused on international marketing. She’s since maintained a rigorous travel schedule to keep the company regularly exporting to 20 countries. Posi Lock Puller credits their passion, patience and persistence as key to becoming a quality-focused manufacturer that has sold to an astonishing 80 percent of countries throughout the world during its 40-year history.

The North Dakota Soybean Council serves more than 10,000 farmers across the state of North Dakota as it seeks to maximize the profit opportunities for all North Dakota soybean farmers. The North Dakota Soybean Council is comprised of a farmer-led board of directors and a six-member team of employees that have been expanding soybean sales since 1985. The organization oversees market development and research initiatives and also funds outside programs that benefit farmers and the soybean industry, such as trade missions to build relationships with overseas buyers. They seek to educate buyers on North Dakota soybean quality, nutrition and sustainability as well as learn about international market demands and soy needs overseas.

Approximately 75 people took part in the 2016 Global Business Awards ceremony, which was sponsored by the North Dakota Trade Office and its network of international business partners. It was held on May 24 at the Delta by Marriott, Fargo. The event consisted of a luncheon and a keynote address by Mark Kennedy, President of the University of North Dakota and a former presidential advisor on international trade. For more information, visit www.ndto.com

The North Dakota Trade Office is a membership-based, private/public partnership that provides education, research, advocacy, organization, and leadership so that NDTO members and North Dakota companies can increase exports and grow their international business.