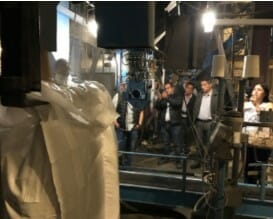 A large delegation representing eight Peruvian companies is touring North Dakota this week as part of a reverse trade mission organized by the North Dakota Trade Office (NDTO) and BusinessHub, a boutique consulting agency headquartered in Santiago, Chile with an office in Lima, Peru. The reverse trade mission focuses on specialty crops and builds upon the relationships developed during the Peru-North Dakota 'Better for You Food Ingredients' Conference & Exhibition held in Lima in April 2017. In addition, the USDA's Foreign Agricultural Service (FAS) office in Lima assisted with the mission.

The delegation went on to travel the state, meeting with specialty crop producers, touring farms and visiting processing facilities throughout North Dakota.

"The product we are looking for is lentils," said James Fano Saenz, General Manager of Jordi, a food importer and distributor in Huachipa, Peru. "When the price is right, we prefer products from the U.S. as we know you standardize the product."

This was the first time that North Dakota has hosted a Peruvian delegation. The U.S. and Peru signed a Free Trade Agreement in 2007.

The North Dakota Trade Office is a membership-based, private/public partnership that provides education, research, advocacy, organization and leadership so that NDTO members and North Dakota companies can increase exports and grow their international business.