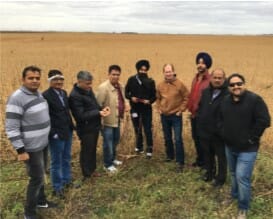 One outcome of the highly successful India Trade Mission was an agreement for the Northern Food Grade Soybean Association (NFGSA) to provide the first shipment ever of U.S. soybeans to India. The shipment was a large sample – 5 containers – of soybeans that was distributed throughout India and tested for quality and consistency in comparison to Indian soybeans. The companies that are currently visiting North Dakota are Indian soy food companies that have received the results of those tests and are looking to further their relationship with North Dakota soybean companies.

Additional testing on North Dakota and Indian soybeans is currently taking place at the Northern Crops Institute (NCI) with Indian delegates in attendance. The focus has been narrowed to tofu and soymilk, with NCI’s newly purchased equipment demonstrating the quality of tofu and soymilk possible with North Dakota soybeans.

“We wanted to prove to them, even after their own testing, that our varieties offer them a big advantage,” said SB&B Foods owner Robert Sinner.

SB&B Foods is one of three companies that is participating in this mission and had provided soybean samples on the inaugural India shipment. Sinner explained that the consensus has been that the quality of the tofu and soymilk produced by North Dakota soybeans is vastly different from the quality produced by Indian soybeans.

“There’s a better color, taste and texture in the final product,” he said.

A huge market of 1.32 billion people, half of them under 27, India remains an attractive market for U.S. businesses. It is the 7th largest economy in the world and 3rd largest Asian economy. India has remained resilient despite cooling economies around the world. A growing financial market, declining inflation, large English-speaking population, and a stable democratic government further benefit the North Dakota exporter.

The North Dakota Trade Office (NDTO) is a membership-based, private/public partnership that provides education, research, advocacy, organization, and leadership so that NDTO members and North Dakota companies can increase exports and grow their international business.