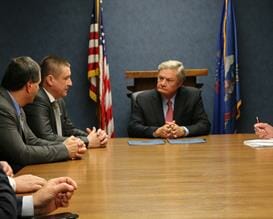 A delegation of nine Belarusian government and business leaders toured North Dakota last month to meet with North Dakota government officials and agricultural specialists. Meeting discussions focused on the emerging opportunities between the Mogilev Region of Belarus and North Dakota in business development and education. This tour was organized by the North Dakota Trade Office (NDTO) after originating with Brandt Holdings of Fargo.

"We are excited to develop the relationship between North Dakota and the Mogilev Region of Belarus," said Dean Gorder, Executive Director of the North Dakota Trade Office. "The Mogilev Region has promising trade potential due to the similar economic interests of North Dakota in the sectors of beef, dairy and agricultural education. We welcome discussions on future opportunities that will be advantageous to both Mogilev's growing agriculture sector and to our North Dakota exporters."

The Belarusian delegation continued their North Dakota tour with visits to beef and dairy cattle operations and a dairy operation equipment vendor. The group also visited with an agricultural supply vendor, and attend meetings with livestock experts at NDSU's Department of Animal Sciences and Beef Center of Excellence.

The Mogilev Regional Executive Committee is an economic development committee based out of the city of Mogilev in eastern Belarus. The region's leading sector is agro-industry - primarily meat and dairy production, grain cultivation, forage crops and vegetables.  More than half of the region is comprised of agricultural land, and agricultural products account for approximately 24% of the region's income.

This is the second visit by a Belarusian delegation to North Dakota after Charge d'Affaires Pavel Shidlovsky's visit last December. Belarus is a founding member of the Eurasian Economic Union along with Russia and Kazakhstan. Kazakhstan is an established, successful market for North Dakota machinery and livestock exporters.

North Dakota's exports have grown from $1 billion in 2004 to $5.29 billion in 2014, according to U.S. Department of Commerce statistics. North Dakota's top exports in 2014 included front-end shovel loaders, tractors, wheat and soybeans. Top export markets for North Dakota in 2014 were Canada, Mexico, Australia, Belgium and China.