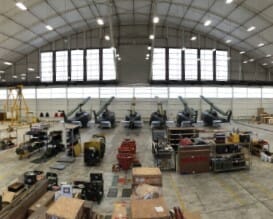 Precision Equipment, Dakota Air Parts and Summers Manufacturing are on a streak of success as they visit international markets and capitalize on a federal grant that partially funds international sales travel. All three companies have increased their export sales as of late, in large part due to travel to foreign markets. Each company was kind enough to share details on the progress they’ve made while using the State Trade Expansion Program (STEP) to offset travel expenses.

“Brian and his team are pushing us to the limits of performance, features and functions,” said Jorgenson, President of Precision Equipment. “It’s great having that market focus and demand from their end.”

In addition to Canada, MagFan flameless heaters, which produce large amounts of heat by interrupting the magnetic fields of high powered magnets, have been sold into Norway – the result of a separate pair of STEP-funded sales trips. Precision Equipment team members traveled to Norway in both 2016 and 2017 after connecting with an importer in Telemark, Norway.  The B2B introduction came about as a result of the sister region agreement that North Dakota established with Telemark in 2013.

Messerschmidt, Precision Equipment’s Global Sales & Marketing Director, says while many industrial heater companies are waiting for oil and gas to come back, Precision Equipment is exploring new areas where large volumes of safe, clean and dry air are needed. Their Norwegian partner is on board and recently used the MagFan flameless heater to decontaminate a flour mill. The mill was battling a bug infestation and did not want to use a pesticide.  The mill’s location on the fifth floor was a challenge, but Precision Equipment was able to design a heating system that pushed heat up five floors and, using a remote thermostat, raised the temperature in the mill to 130°F for 11 hours. The telemetry was monitored from their headquarters and effectively killed all living organisms in the mill without any pesticides or residue.

Dakota Air Parts is finding success abroad, as well. The Fargo-based aviation company has served helicopter operators in New Zealand for a number of years, including the Royal New Zealand Air Force (RNZAF). When the RNZAF retired their squadron of UH-1H “Huey” aircraft last year, Dakota Air Parts was the sole successful respondent during the surplus process and was awarded the complete squadron of 10 UH-1 aircraft. The award included all of RNZAF’s Huey surplus parts, tooling, ground support equipment, mission equipment and other related material.

The purchase of RNZAF’s inventory was an important acquisition due to the difficulty for many Huey operators to obtain aircraft support. Dakota Air Parts specializes in such support – buying, selling and assistance with rotor-wing and fixed wing aircraft, turbine engines and parts, both OEM and aftermarket. After taking ownership of RNZAF’s large inventory, Dakota Air Parts has been able to supply civilian and military operators with everything UH-1 operators require, including whole aircraft, to fly and maintain a fleet of Hueys.

The use of STEP funds was essential as the travel and acquisition was a significant investment. STEP covered a portion of the expenses incurred to send Dakota Air Parts’ staff to the RNZAF’s Base Ohakea on the north island. The scale of the project required five people on the ground, cataloguing and preparing the items to be shipped while continuously sending information about the aircrafts and materials back to headquarters for the sales staff to review.

The trip was an immediate success as many items were sold or quoted for customers before they had left New Zealand. In fact, on the first day on base, Dakota Air Parts shipped one package of tooling back to the U.S. to support an overseas sale. The team was also able to further their sales and logistics connections in New Zealand and Australia. Dakota Air Parts expects the new inventory to increase sales in South Africa and the Middle East, as well.

In addition to bringing equipment, Summers Manufacturing held a promotion at their booth to draw crowds. Their efforts and investment into the show paid off when they received early orders during the trip. So far, they’ve already sold more than $200,000 during the first quarter as a result of using STEP funds to attend the show.