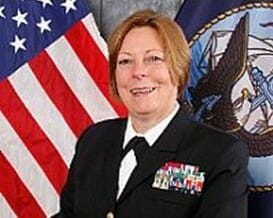 If you were in Fargo last week you may have noticed a Naval presence; flight simulators available to the public, men and women in uniform around town, and the Blue Angles over head.  Navy Week is also an opportunity for representatives of this military branch to reach out and talk with civilians about how the Navy affects their daily lives.

Rear Admiral Patricia Wolfe sat down with NDTO executive director Dean Gorder, some representatives from NDTO member companies and an NDSU professor who specializes in ag policy and trade to have a conversation about what role the Navy plays in keeping sea lanes safe and what concerns local exporters have concerning shipping.

Rear Adm. Wolfe says one of the Navy’s biggest challenges is supporting ships and sailors when they are not in the United States.  From a logistics standpoint the challenge is supporting an active, moving fleet while having in-transit visibility; where is it, and when is it going to get there?  It is important to be able to track shipments and know where those shipments are at any given time.  A glowing example of a company that does this well is FedEx.  FedEx customers can track their item; know where it has been, where it is and when it is delivered.

That visibility is a vital part of the food industry as well.   A local exporter of ag products says having the ability to follow their goods in transit is a priority but it is also more expensive. The food industry has implemented a visibility program, RFID or radio-frequency identification.  That new technology comes with an added cost that must be passed along, but exporters are finding food safety is a priority around the world and consumers are willing to pay for it.

Another priority of the Navy is keeping sea lanes safe.  When an exporter ships their goods they trust the containers will get to their destination.  The Navy is charged with that task, which includes keeping pirates at bay.  Rear Adm. Wolfe says the area of the world where piracy is the most prevalent is in the Gulf of Aden.  There are other piracy hot spots including waters near Indonesia and Malaysia; however the problems there are not on the same scale as off the coast of Somalia.

While piracy is a concern of local exporters, it is not as big of a problem as finding the containers to ship goods in.  Exporters in this part of the country agree that the lack of shipping containers is a monumental problem.  NDSU Professor Dr. Won Koo is the director of the Center for Agricultural Policy and Trade Studies. His research focuses on international trade, demand analysis, and agricultural policy.  Dr. Koo agreed the shortage of containers is a major problem, but exporters are also facing other challenges including:  1) Finding the cheapest way to ship agricultural goods from the US to their destination. 2) Finding the best domestic transportation mode.  3) Safety issues as we ship goods to Africa.  And as we increase safety, how much to me have to sacrifice?  4) Environmental issues including transportation capacity, do we have enough railcars, barge capacity, and containers? 5) Transportation costs.  Ocean transportation costs are increasing, miles are added to avoid piracy, and security teams are now being used on ships.  While these precautions will protect goods they also increase costs.