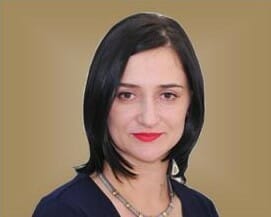 The North Dakota Trade Office is pleased to announce the addition of Natalya Nesterenko to its Kazakhstan office.  Natalya will take over for Yermek Umurazkov as the country representative.  NDTO executive director Dean Gorder says, “Natalya will be a great fit.  She has an ag background and spent the past 6 months working with the U.S. Department of Agriculture Foreign Agricultural Service in Astana, Kazakhstan.  We’re very pleased to have her as part of the NDTO team.”

Nesterenko is no stranger to North Dakota.  She accompanied the February 2011 Cochran Fellowship Program group to the state and served as an interpreter and trip coordinator.  In addition, Natalya has a BA in accounting and economics, worked at the U.S. Housing and Urban Development in a homeless shelter assistance program and the U.S. Department of Health and Human Services for a refugee resettlement program.  Natalya is a native of Kostanai, Kazakhstan but married a Peace Corps Volunteer in 2001 and moved to Washington D.C. shortly thereafter.  Natalya, her husband and two sons currently live in Astana where he is the head of USAID in the U.S. Embassy.