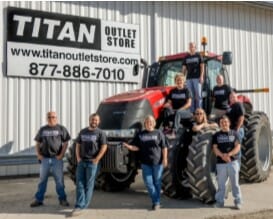 Titan Machinery’s export program is an example of success achieved from hard work and patience. The Titan Outlet Store, the company’s used machinery outlet, has found success in Latin America, eastern Europe, Asia and Africa as a result of painstaking attention to detail and team efforts. As an NDTO member, Titan Machinery gave us an inside look at how they find markets for used equipment in the CNHi family of brands – including Case IH, Case Construction, New Holland Agriculture and New Holland Construction.

Titan Machinery is a multi-unit business with mature locations and newly-acquired locations. The company owns and operates a network of full service agricultural and construction equipment stores in the United States and Europe. Although Titan Machinery was founded in 1980, it has roots in two Red River Valley dealerships dating back to 1926 and has legacy stores dating back to the turn of the century. Titan Machinery currently operates a network of 75 North American dealerships in North Dakota, South Dakota, Iowa, Minnesota, Montana, Nebraska, Wyoming, Wisconsin, Colorado, Arizona, and New Mexico, including an outlet store, and 20 European dealerships in Romania, Bulgaria, Serbia, and Ukraine. Titan Machinery currently exports equipment to 15 – 20 countries on 6 continents

The Titan Outlet Store acquires and sells aging and used equipment from Titan Machinery’s dealership network. When Don Aberle became the Titan Outlet Store’s manager in 2008, the company had already seen great success in the export of used machinery to Ukraine. Aberle’s job was to expand that success to the rest of the world. He now heads up all of Titan Machinery’s used machinery exports.

Aberle has developed markets for used agricultural and construction machinery in Africa and Asia, but has a clear focus on Latin America. That focus was developed when Aberle’s team participated in ExporTech, a 2-month export training program facilitated by the NDTO, U.S. Commercial Service and Impact Dakota (formerly the Dakota Manufacturing Extension Partnership.) The research performed during ExporTech led Titan Machinery to Uruguay, a country with a growing agricultural machinery market, a lack of used equipment available and an opposite growing season to the U.S. Titan Machinery joined a 2010 NDTO trade mission to attend the ExpoActiva agricultural show in Mercedes, Uruguay. The contacts made at the show developed into relationships that resulted in $5.5 million in sales within a couple years.

After establishing a presence in Uruguay, Titan Machinery branched out to Paraguay, Colombia and other Latin American countries. The company overcame the language barrier by using the NDTO’s Export Assistant Program, which allows a graduate student from NDSU or UND to gain experience by working up to 20 hours per week at a North Dakota company. Titan Machinery has employed several Spanish speaking graduate students through the program and hired them after graduation as full-time employees.

Aberle credits the Titan Outlet Store’s success to an ambitious email marketing program, a highly knowledgeable and responsive team, and taking the time to build relationships with potential customers.

“The key to exporting,” said Aberle, “is being committed to it long-term. It takes a long time to build trust. And trust is only built through action and follow-up.”

The Titan Outlet Store sends out about 50,000 emails per month worldwide, with specific broadcasts for each market. Aberle estimates 90% of their exports are due to a customer receiving years’ worth of emails and repeatedly seeing the Titan brand. The Titan Outlet Store, in turn, receives many emails in response.

Aberle prides his team on answering every single email, even when they know that 95% of them aren’t serious buyers. In order to distinguish actual customers within the barrage of emails, they ask questions and follow up with each person. Their ability to discern potential customers has resulted in millions of dollars of sales.

Recently the Titan Outlet Store sold $2.8 million of machinery to a buyer in Mongolia. Incidentally, they never actually met him. When asked why he chose Titan, the buyer said it was because Titan was the only company that took the time to answer all his questions. Through email correspondence, Aberle’s team had answered a multitude of questions on technical issues, machinery recommendations and supplied numerous data, research and crop recommendations. The Titan Outlet Store’s equipment wasn’t the cheapest, but they closed the deal because of the time they had taken with the customer and the trust that was built.

Aberle says the number one challenge is building that confidence that allows a farmer to purchase a piece of equipment from a company in another country.

“People want U.S. equipment because of the quality, but it all comes down to trust. If you’re going to get into the export game, know that it takes a long time.”

For more information on Titan Machinery and the Titan Outlet Store, visit www.titanmachinery.com.