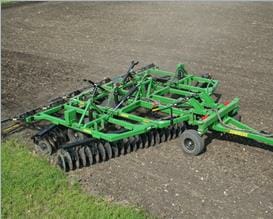 Summers Manufacturing continues to fulfill their mission of being “field tested tough” by recently celebrating their 50th anniversary of producing high quality agricultural equipment. Since the company was founded in 1965, they’ve expanded their products from truck hoists to a multitude of innovative harrows, sprayers, rockpickers, cultivators, rollers, chisel plows, and disks. They’ve also expanded their territory from North Dakota to throughout the United States and world.

Harley Summers founded Summers Manufacturing in 1965 when he began producing truck hoists out of his blacksmith shop in Maddock, ND. After increasing sales and winning a contract to build Herman harrows, the company moved that same year into a 7,200 square foot factory in Maddock in order to fulfill demand for the hoists and harrows. In time, Summers began manufacturing and distributing numerous lines of equipment including Herman harrows, Agri-sprayers, Crown rockpickers, Superweeders, the Summers Diamond Disk, and the Supercoulter vertical tillage tool.

Summers Manufacturing has continued to expand and currently operates out of expansive, modern facilities in both Devils Lake and Maddock, as well as an assembly and service center in Aberdeen, SD. They’ve won several awards, including Harley Summers being selected as the North Dakota Small Business Person of the Year in 1983 by the Small Business Administration (SBA), and NDTO’s Exporter of the Year award in 2008. In 2013, Summers President Deb Anderson, daughter of the late Harley Summers, won the Manufacturing Institute’s Women in Manufacturing STEP (Science, Technology, Engineering and Production) award in recognition of her significant achievements in industry.

The Summers family has rejected private purchase offers in order to ensure the business will continue to operate in Devils Lake and Maddock. Instead they chose to sell the company to their employees through an employee stock ownership plan in 2007. Deb Anderson was elected president in 2008 after the company became 100% employee-owned. Anderson has increased the company’s capacity and number of employees by two fold.

When Summers sought to diversify their customer base, they turned to exporting. After increasing sales to Canada, the company began receiving inquiries from Saudi Arabia and other middle eastern countries. Brian Perkhun, current Vice President of Sales, took over the international end of Summers in 2007. At that time, they were working with John Deere on a deal to couple Summers packers with John Deere air seeders and shipping them to Kazakhstan. Their market share in Kazakhstan, as well as Russia, increased in part due to their Canadian dealers. As it turned out, several of Summers’ dealers in Canada had family ties back to Kazakhstan and Russia. Summers, together with their dealers, were able to further promote the agricultural products. Summers’ line of tillage, sprayers, disks, harrows, and chisel plows are the most popular products in these countries. “The CIS [Commonwealth of Independent States] countries have always been a successful market for us, just because the acreage and climate are similar to North Dakota,“ said Perkhun.

However they have run into some differences between the U.S. and CIS region, such as alternative business models. CIS countries don’t always have a dealership model, so occasionally they will work with end users. Another obvious difference is language, but “always get your own translator,” says Perkun. “You always want someone on your side.”

Perkhun says although travelling overseas periodically makes a huge difference, Summers’ equipment really speaks for itself. “It’s build sturdy and defect-free. We have a good following with repeat customers.”