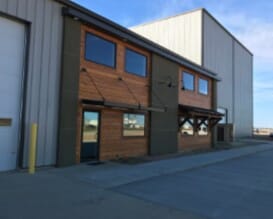 Stone Mill of Richardton is an illustration of North Dakota industriousness and grit. The company has overcome multiple barriers over their nearly four-decade history and has now positioned themselves for their best years yet. Stone Mill is family owned and operated by the Hoffs and Dresslers, and processes organic and conventional flax, garbanzo beans, lentils, quinoa and radish seed.

Ambrose and Charlotte Hoff are an enterprising husband-wife team that began their first venture in 1980 with a manufacturing facility that catered to the oil industry during North Dakota’s first oil boom. When oil went bust in 1986, they returned to their farming roots. Ambrose traveled to California and brought back garbanzo beans, not a traditional crop but one he thought would work in drought-stricken western North Dakota. The beans thrived. Since the family had one of the only farms in the state growing garbanzo beans, they purchased equipment and began cleaning and processing the beans themselves. Most of the beans were exported to the Middle East, the only major market at the time. However, after the 9/11 terrorist attacks, an embargo was placed on Afghanistan and their primary market was abruptly cut off.

Stone Mill suddenly had beans ready to be shipped but no customers they could ship to. That experience left the family with financial struggles and a sour taste for exporting. The Hoffs’ daughter, Daneen Dressler, came on in 2002 as the business was changing gears from garbanzo beans to flax. She had returned to the family business after graduating with a Management Information Systems degree from NDSU. Dressler helped the company get back into the export game by participating in the ExporTech program and acquiring credit insurance through the services of the Trade Acceptance Group out of Minneapolis and Ex-Im Bank. The company began exporting again, primarily into Canada.

This year’s drought didn’t do the flax crops any favors, but Stone Mill is gearing up for when their products get replenished in the new crop year. They are currently adding a state of the art processing/packaging/storage facility and tripling their capacity. Stone Mill is working with its sister companies, steel storage bin manufacturer Amber Waves, Amber Waves Electronics and Amber Waves Integration to build a facility that will largely be automated with an eye towards meeting and exceeding Food Safety Modernization Act (FSMA) requirements. All customization and automation of the facility will be done in-house.

“We’re able to do a lot of things ourselves. We’re writing our own software and building our own network of sensors and alarms,” said Dressler. “A third party doesn’t love it as much as we do, so we are providing ourselves with food safety oriented customization.”

The facility will be focused around identity preservation. The Hoffs’ son Kalvin is an electrical engineer that is leading a team of software engineers to create a revolutionary system for the company. The automated system will track products from the time they enter the facility via small, numbered tanks through to processing and cleaning, to packaging and storage in their 40,000-square foot warehouse, all reported in real-time. Each tote bag will have a tag to identify its location and a bill of lading will automatically be generated when ready to be shipped. In this way, they will know the exact source and movements of each product in case of a recall, or in case of a preferred or superior product.

Stone Mill’s automation efforts are not only to satisfy food safety and identity preservation requirements, but to provide quality employment to the area population. The company realizes it’s in a tight labor market and sees automation as a way to maintain a lower number of employees in higher paying jobs.

“Our team members are professionals, and we’re making an environment where they’ll want to stay long term,” said Dressler.

Stone Mill’s strict food safety and compliance programs give them an edge when exporting to highly regulated markets. The nature of their product is best suited to populations seeking food with added health benefits. The company is currently analyzing additional markets where these two components come together. They consider exporting a way to diversify and stabilize their business by expanding their customer base.

The one puzzle piece they’re still waiting for is a better transportation network in North Dakota. Trans-loading in Minot would reduce shipping prices and allow the company to better compete, but the Port of Minot is still working to get containers. It’s a challenge to find safe, economical transport for their products that will comply with FSMA regulations. Loading containers on site is their safest option, but it comes at the cost of repositioning containers. It’s an issue they’re actively working on.

And yet, transportation is another hurdle that the family will overcome – just as they have with oil busts, droughts and trade embargos.