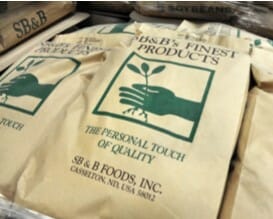 Fifth generation owner/partner and vice president of SB&B Foods, Todd Sinner, is currently traveling, visiting customers of the family’s food-grade ingredient company based in Casselton, North Dakota. He will join his father, Robert Sinner as they complete yet another journey overseas to build upon the popularity of SB&B Foods’ non-GMO, identity-preserved products in international markets. The family-owned company delivers food-grade products to approximately 70 customers outside of the U.S., a patronage earned after years of effort.

The origins of SB&B Foods date back to 1906 when Jean Baptiste Sinner immigrated from Germany and settled on land east of Casselton. He and his wife Josephine began farming, eventually passing the land on to their son Albert. In 1952 Albert, along with his sons George and Bill and their brother-in-law Ellery Bresnahan, formed a partnership called Sinner Brothers & Bresnahan (SB&B). The Sinners and Bresnahans continued farming, sold seed and raised cattle for domestic consumption until the late 1980s when the partnership began to diversify.

Diversification involved cutting out the middle man broker and marketing directly to international customers. In 1988, George’s son, Robert, took the first trip over to Japan to begin promoting SB&B’s food-grade soybeans within the Japanese soy foods industry. Soy is a main ingredient in many Japanese foods, making the country a natural choice for international expansion.

Success did not come easily however. Japan was a difficult market to break into, requiring years of diligence and a high tolerance for risk. Adding to the uncertainty was that exporting was an unusual venture at that time – there were very few North Dakota companies doing international business in the late 80s. Their persistence paid off. SB&B Foods subsequently began to see the resulting sales after years spent cultivating relationships within the country.

After achieving success in Japan, SB&B Foods expanded into additional countries. To keep up with demand from overseas food manufacturers, the company began contracting with regional farming operations. Their fully traceable products are currently sourced from over 200 producers with a total of 65,000 acres of farmland spanning five states. All products are cleaned, packaged and shipped by SB&B Foods’ cleaning and processing entity, Identity Ag Processing, which has locations in Casselton and in Bloomer, Wisconsin. Identity Ag Processing, along with SB&B Foods’ international logistics department, allows them to control the handling of their products from the ground to the customer.

The company markets spring wheat, white sorghum, and rye among other products, though their major product segment is soy foods. SB&B Foods sells 12-14 different types of soybeans, each with their own unique characteristics. Variables include size, protein, sugar content and agronomic traits. SB&B Foods matches the soybean characteristics that a customer wants with the current agronomic conditions of its producers.

Robert and Todd are the father-son international sales team at SB&B Foods. Todd grew up with the company, though he only joined it in 2006 after graduating from UND’s business school and holding international finance positions within Ex-Im Bank and Bank of America in Chicago. He returned to the family business in order to help expand the company’s exports. Both Sinners spend a great deal of their time on travel and communication to support their foreign client base. Todd Sinner estimates a total of 50 trips to Asia since joining SB&B Foods.

Todd regularly advises companies on the export process as a member of the North Dakota District Export Council.  He urges companies that are just beginning to export to have patience and approach exporting as a long term investment.

“Exporting is important because the marketplace is huge and the opportunities are endless really,” said Todd, “but there are some relationships that we start and we don’t do much business with them for five years.”

He also encourages exporting companies to protect themselves and their product through insurance, to make sure that they understand who their customer is and understand the country’s risk factors.

Sinner says exporting has been a very rewarding endeavor as SB&B Foods’ customers are very sincere and loyal people that have reciprocated and taken the time to get to know the people and culture at SB&B Foods, as well. International customers appreciate that the company is owned by fifth generation farmers that are committed to delivering high quality soybeans, as well as other products.

“Overall our business is set up to grow and expand. We just want to deliver what the customer wants.”