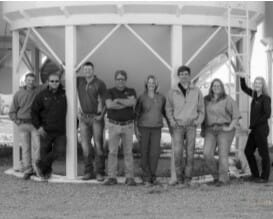 Great Northern Ag is led by a husband and wife team that found themselves returning to their farming roots after years of living outside of the state. A constant evolution of their operations has turned their family farm in Plaza, ND into a global business. Their efforts have taken them around the world as they’ve marketed pulses and specialty crops, often grown using their own line of genetics.

Before returning to North Dakota, Mark Kok and Kris Bergstrom-Kok spent years living in Texas and Montana. In Montana, Kris taught at a school while Mark sold advertisements for a county paper. He ended up purchasing the newspaper company and ran the paper along with working in real estate and construction. Things changed after Mark’s father passed away, and someone needed to take over the family farm. They moved their family back to Western North Dakota to carry on the family tradition.

The Koks began farming and soon broadened their operation to include retailing seed. They expanded because, as Mark Kok said, “Back in the late 80’s/early 90’s, it wasn’t very profitable to be in farming.”

Mark went to NDSU and bought registered barley seed and sold it to a local elevator. He then studied seed genetics and the process of raising seed and the Koks began propagating and retailing their own licensed seed.

The genetics side of their business quickly grew, and the Koks expanded again by acquiring commercial grade cleaning equipment and offering pulse conditioning services. They began cultivating new crops, including lentils, and became more involved with the Northern Pulse Growers Association (NPGA). Mark was soon on the board and became president of the NPGA in 2007. As their involvement in the industry grew, Great Northern Ag became interested in exporting and marketing their products internationally.

“Our business model is unique in that we not only do the export side of it, but we evaluate the properties and we can fine tune what a customer wants as far as genetics,” said Mark Kok.

So far, that business model has worked. Great Northern Ag selected one of their pea varieties that they believed would fit within the Chinese market and it’s been shipped successfully to Chinese buyers ever since. The same approach has worked in other countries, as well, including India and Colombia.

The evolution of Great Northern Ag continues as the company recently installed new, modern food-grade cleaning equipment at their processing facility. They remain confident as they continue to meet with established customers and also await the trade liberalization of developing nations with a high demand for pulses. Great Northern Ag’s consistent desire to learn more and focus on quality genetics will likely gain them additional customers and passport stamps.