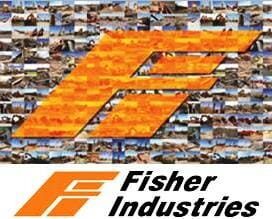 Fisher Industries of Dickinson, ND started from meager beginnings on a family farm in southwestern North Dakota, and has since grown into a diversified company with 8 divisions in 7 states and dealers all over the world. What was once a small aggregate operation has evolved into a business capable of massive earthwork projects, including building the world’s largest cathedral arch bridge in 2012 over the Galena Creek in Washoe County, Nevada.

The company began with the Fisher family selling sand and gravel from a small rock deposit on their farm about 2 miles outside of Dickinson. Gene Fisher was just a school-aged boy when he began helping with the business. As an ambitious young man, he prospected additional land and found a large deposit of rock that became the main site of the company. That site is still operational today as the Fisher Sand & Gravel Pit – Dickinson.

In 1952, Gene Fisher officially established Fisher Sand & Gravel, Co. As a new company in the aggregate processing industry, if Fisher couldn’t afford a piece of equipment that he needed, he would design and manufacture his own. It did not take long before customers took notice of the efficiency and ingenuity of his equipment pieces, and in 1967 he launched an equipment manufacturing division, General Steel & Supply Co (GSS). Together the two divisions formed a perfect partnership, with General Steel fabricating quality aggregate processing equipment that sold throughout the U.S., and Fisher Sand & Gravel testing that equipment and becoming one of the top 25 sand and gravel producers in the United States.

The international side of the business gradually grew after a demand for crushing and conveying equipment was discovered in the gold mines of Central and South America. Fisher met this demand and began selling equipment to several major Latin American engineering firms. In 2002, Fisher introduced the Fisher Air Separator at CONEXPO-CON/AGG, the international trade show for construction industries. The Fisher Air Separator is a dry fines processing system that effectively removes unwanted fines from aggregate products. The separator promotes water conservancy, which makes it a hot product in countries where water shortages are a real concern. After introducing their separator to the global market, Fisher’s international business really began to thrive. Today exports comprise 10% of Fisher’s yearly business.

The first Fisher Air Separator was sold to a company in Malaysia in 2004. As of 2015, the air separator is in use in Australia, Canada, Indonesia, Malaysia, Saudi Arabia, South Africa, Sweden, the United Kingdom, and the United Arab Emirates. Fisher’s high quality stackers and chain feeders have also generated a great deal of interest overseas. Chain feeders are used in the screening and crushing of aggregate materials of all sizes. Stackers are used in the piling of bulk materials.

Greenstone is also interested in manufacturing the Fisher Air Separator for use in China’s quarries. The separator has gained a respected reputation in China due to its high quality and its ability to support water and fuel conservancy. Such green technology has made Fisher Industries popular in Australia, as well. Manufacturing green products to fulfill strict environmental regulations are just one standard that Fisher adapts to within each of the countries it does business.

Fisher’s ability to adapt to environmental regulations was recently recognized when the Hanson and Southern quarries of Australia were awarded for their use of the Fisher Air Separator. The Cement, Concrete, & Aggregates Australia (CCAA) Health & Safety Extractive – Environmental Innovation Award is presented to a quarry operation achieving the best overall environmental innovation performance. Factors considered for this award are air quality, water and waste management, visual impact of site, site administration, noise control, rehabilitation, and community relations. These two quarries were chosen for this award specifically for their environmentally sustainable practice of producing quality manufactured sand with the Fisher Air Separator.

Fisher Sand & Gravel has expanded into an international civil earthwork and crushing company by following Gene Fisher’s drive that is encompassed in the company motto of “We like the tough jobs.” They pride themselves on choosing agents that can operate independently as extensions of GSS. GSS’s international dealers are presently located in Africa, Australia, Canada, Europe, and the Middle East.