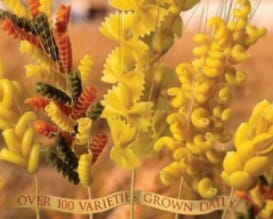 Dakota Growers Pasta Company has been bringing Italian fare to the Northern Plains for over 20 years. With origins as a farmer-owned cooperative, Dakota Growers Pasta Company (DGPC) has risen in the ranks to become the third largest pasta manufacturer in North America.  They use high quality durum wheat to create a product that is served in schools and restaurants, used in food ingredients, and sold in stores under private labels, as well as under the Dakota Growers name.

In 1991 North Dakota durum wheat growers were looking for ways to add value to their product, and came up with the idea of starting a durum mill owned by farmers. The durum mill would produce pasta, which would sell at a higher price than wheat. More than 1,100 growers invested funds to help build a mill and plant in Carrington, ND, a location chosen largely for its easy access to major highways and rail lines.

The manufacturing facility opened in 1993 and DGPC’s products quickly became popular and the company profitable. In 1998 an additional plant was opened in New Hope, MN. However in the mid – late 1990’s, crop disease heavily impacted North Dakota’s durum wheat production. Fusarium head blight, also called scab, along with above average rainfall and humidity, forced many of the cooperative’s members to discontinue growing durum wheat. The growers and the cooperative were pressed to include purchases of durum wheat from non-members farther west. As the cooperative found it increasingly difficult and expensive to acquire quality durum, the majority of its members voted to change the status of the company. In May 2002, DGPC changed from a cooperative to a corporation in order to raise capital.

Then Chairman of the Board Jack Dalrymple had said that the company’s new structure allowed them to attract new investors and additional capital in order to make operational investments and remain competitive.

DGPC worked to increase their competitive edge by creating a vertically integrated durum mill and manufacturing facility. DGPC mills, processes, and manages their own supply chain in order to increase cost efficiency. The company has continued to operate independently although they’ve been acquired twice. Canadian agribusiness Viterra Inc. bought DGPC in 2010 in a deal worth $240 million, followed by Post Holdings acquiring DGPC in 2014 for $370 million.

The value of the company lies in a dedication to making quality pasta. No. 1 Hard Amber Durum wheat is used, which allows the high protein pasta to retain its shape and color throughout the cooking process. Pasta made from this type of wheat also resists overcooking – it remains al dente longer, even when reheated, making it ideal for school and restaurant use.

DGPC’s product is in demand internationally as well, including in South Korea. They’ve been on Outback Steakhouse’s Korean menu since 2013. The Australian-themed restaurant’s Korean locations purchase about 600,000 pounds of their pasta each year to be incorporated into dishes. DGPC’s pasta was chosen based on the ingredients and the customer service that the company offers.

The simplicity of the ingredients makes it an easy sell in Korea, according to DGPC’s Senior Director Sales Analyst Michael Rutt. “We’re in a good spot,” said Rutt. “Our product is durum wheat, water and enrichments. Our high quality products and customer service meet the specifications for product in their stores.”

DGPC’s main focus has been on retailing store brand pasta. Store brand pastas such as Kroger’s, Safeway and Hy-Vee all contain DGPC’s product. The company’s product is also served in K-12 schools throughout the nation. DGPC does sell under its own name, as well as under the Dreamfields brand, a high fiber and high protein pasta.

As unexpected as it is to find a pasta plant in rural North Dakota, Dakota Growers Pasta Company has secured their position within the market. Their product may be under a store brand’s name, or inconspicuously part of your meal at your favorite restaurant, but the opportunities they’ve brought to regional durum growers and the area job market have made Dakota Growers Pasta Company quite remarkable.