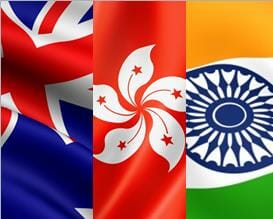 ND Hosts Australia, Hong Kong and India in May

Trade officials from around the world have set their sights on our state. In May alone, the North Dakota Trade Office and partner organizations were honored to host delegations from the Australia Consulate in Chicago, including Consul-General The Hon. Roger Price; the Consul-General of India in Chicago, The Hon. Mrs. Mukta D Tomar; and, the Hong Kong Economic & Trade Office of San Francisco.

The Australian Consulate visited North Dakota May 6 through May 9, and worked their way from Grand Forks to Fargo, then westward to Bismarck and the Bakken.  The interest from Australia covered a variety of industries, with a heavy focus on agriculture, educational cooperation between North Dakota and Australian universities, indigenous issues and energy.

“As a result of our visit to North Dakota, we have realized the great similarities between the State and Australia, particularly across agriculture, resources and indigenous issues,” said Consul-General Price.  “Thanks to the North Dakota Trade Office for organising a very productive visit and we look forward to returning and strengthening ties.”

Australia is the third-largest export destination for North Dakota products with a total of $124.4 million exported in 2012, a 50 percent increase over the previous year.  Top products exported to Australia currently include tractors, front-end shovel loaders, seeders, combines, navigation equipment, construction equipment and belting.

Subrina Chow, director of the Hong Kong Economic & Trade Office in San Francisco held two trade events in Bismarck and Fargo on May 8 and May 9, respectively.  More than 80 people attended the events in which Chow discussed market opportunities for North Dakota companies in Hong Kong.

Chow said Hong Kong is a gateway to China – and all of Asia – as well as a good place for North Dakota companies to base a business or to find an Asian business partner.  Based on her conversations with state government officials and organizations, Chow sees a variety of export opportunities for North Dakota products and services.

"We see a lot of market potential in Asia for North Dakota agricultural products and technologies.  We are glad that during our short visit, we were able to meet with important government and business leaders and discuss how North Dakota companies could use Hong Kong as a regional base to reach the Asian markets,” said Chow.  “With your scenic Northern plains, archeological discoveries and rich history, North Dakota would also make an interesting destination for Hong Kong tourists."

Sunflowers, particularly in-shell sunflower seeds, are also an opportunity for North Dakota exports.  According to Agriculture Commissioner Doug Goehring, the in-seed sunflower product distribution of one Chinese company is equal to the entire production of all U.S. sunflower companies

The North Dakota Trade Office has had an official representative in Hong Kong and China since 2011.

The Consul General of India, Mrs. Mukta D Tomar, made a short visit to North Dakota on May 8 but was able to maximize her time with meetings at the Office of Governor Dalrymple, the Northern Pulse Growers Association and fracking operations in Dickinson.  The main focus of Consul-General Tomar was energy, but she sees a number of trade opportunities between North Dakota and India exist and the market continues to grow.

India is the world’s largest importer of pulses (peas, lentils, and beans), with annual imports ranging from 2.5-3.8 million tons.  Although India is primarily a price market, the typically higher-priced U.S. green and yellow peas and lentils have become more price competitive in the Indian market in recent years.  Additionally, pulses are currently exempt from import tariffs.

With a population of over one billion, India presents growing opportunities for North Dakota exporters.

To learn more about opportunities for your products or services in the above markets, contact NDTO at (701) 231-1150.