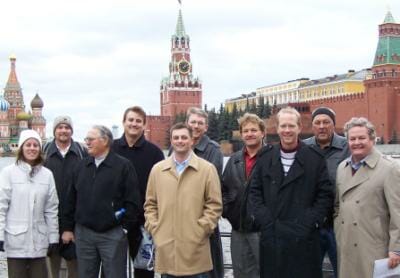 Mission to Kazakhstan, Russia and Ukraine pays off for ND companies

Seven North Dakota companies that participated in a recent trade mission to Kazakhstan, Russian and Ukraine report that the trip is helping them to expand their international sales.

"Exploring trade in a part of the world with such great potential for agricultural and manufacturing growth has already yielded trade deals for some of our delegation, and we have good prospects for more," Dalrymple said. "All the while, we are establishing promising business relationships for the future with some of the most important buyers in the region."

In Moscow, Dickinson-based SolarBee forged a long-term partnership with two companies that have landed five projects to improve the quality of water supplies in Kazakhstan and Russia, said Chris Harris, SolarBee vice president of international marketing.

The partnerships are expected to yield SolarBee an initial sale of its solar-powered water circulators valued at about $220,000, Harris said.

In Kazakhstan, Tom Shorma, president of Wahpeton-based WCCO Belting Inc., reported landed a major order to supply swather belts for a manufacturing company. WCCO Belting is a leading manufacturer of specialized rubber belting for industrial and agricultural markets. Shorma said he has begun talks to supply a second Kazakhstan company that also manufactures swathers, used by farmers to cut and windrow mature crops for harvest.

All members of the trade delegation reported making business contacts that they expect to result in export sales to Kazakhstan:

"The trip's first phase has been very productive," Shorma said. "You can't do that without being here to build those relationships, getting to know their needs and learning the market.

Titan Machinery, Fargo: Officials from Titan Machinery, a seller of new and used CaseIH agricultural equipment, said the trade mission led them to a distributor slated to sell Titan equipment and parts throughout Kazakhstan. "I believe we will be doing a lot of business in Kazakhstan," said Darrel Gillespie, Titan's remarketing manger.

"This was a very productive meeting for us because they have the established service facilities, service vehicles and trained personnel," Gilliespie said. "They are very financially sound and well structured. In addition, their marketing plan parallels ours so it's a very good fit for us.

Dalrymple, Stacy Anthony, the used equipment manager for Fargo-based Brandt Holdings, and other members of the trade delegation toured a 128,000-acre Kazakhstan farm. In a 4,000-acre wheat field about 40 miles north of Astana, they met the farm’s director and discussed the sale of used equipment with the farm's director. Officials from the farming company agreed to visit North Dakota in November where they will visit Brandt Holdings and other agricultural equipment dealerships.

"We made a contact that was very, very strategic," Anthony said. "I believe it will produce dividends over and over."

Other highlights from the mission include:

Mike Gates, president of Gates Manufacturing Inc., Lansford, N.D., reported that he will forward six bids to sell his company's field harrows. Gates said he has also begun negotiations with a potential business partner to manufacture Gates harrows and market them throughout Kazakhstan.

The economies of Kazakhstan, Russia and Ukraine continue steady growth. The countries’ governments and private sectors are heavily investing in the development of their agricultural industries which are in great demand for new and used, late-model equipment and machinery, the U.S. Department of Commerce reports.

Companies that participated in the two-weed trade mission were: