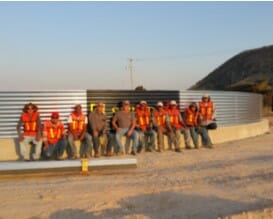 Superior Grain Equipment is a family-owned company that has grown from a concrete contractor for grain bin foundations to a grain bin dealer, then manufacturer of grain storage equipment sold around the world. The company has rapidly expanded its international footprint and in 2012 received the US Department of Commerce’s Export Achievement Certificate, followed by the 2014 North Dakota Exporter of the Year award. Here we asked International Sales Manager Jon Engelstad to share Superior Grain Equipment’s approach to exporting and some tales from the road.

Engelstad has been with the Kindred-based company since 2003, and took on the company’s exporting efforts in 2010. He has spearheaded an ambitious plan to establish an international dealer network all over the map, taking six or seven multi-country trips per year in order to develop relationships and support customers. The company has worked extensively in developing countries where food supply security is an issue.

In developing countries, the amount of waste due to poor grain storage is staggering, says Engelstad. In East Africa, they often experience a 40% loss due to improper storage.

“With the world’s population growing as it is, it’s a challenge to feed the people,” said Engelstad. “To avoid huge post-harvest losses, they need education, equipment and the tools to eliminate waste.”

Superior Grain Equipment manufactures grain storage, handling and conditioning equipment. The company prides itself on building products that can withstand the harshest weather and will last for generations. The grain bins come in a variety of sizes, depending on the end user’s needs and are packed full of technology from the floor to the roof. There are features to stabilize the structure, provide strength under heavy loads, protect against outside elements, monitor temperature and moisture, ensure airflow, keep out pests and allow for easy loading and unloading. Superior Grain Equipment also sells Excel Grain Dryers that the company lauds as able to produce higher quality products, with higher test weights and ultimately higher grain prices.

Engelstad’s travels have taken him far and wide, which has resulted in the company presently selling into twelve countries on five continents. A great deal of preparation goes into each trip, including research and using the services of the NDTO and U.S. Commercial Service. Superior Grain Equipment uses a ‘country matrix’, a skill learned during ExporTech, that helps illuminate which countries will be using their product.

Still, all that research couldn’t prepare Engelstad for several precarious situations he’s found himself in over the years. He was in Cairo several years ago when rioting broke out while transferring between airport terminals. He could hear the violent clash occurring in the distance as a suspicious looking driver took him (the lone passenger) on a circuitous path to the next terminal during the midnight layover. He later discovered that hundreds of people had died amidst the fighting that week. On the same trip, Engelstad went on to Ethiopia where the threat of terrorist attacks made travel into Addis Ababa almost impossible. The hotel shuttle could make little progress as it was repeatedly pulled over and searched by armed guards. Finally, the shuttle driver parked and simply walked with Engelstad over 2 miles to the hotel, where he checked in and was told it’d be best if he didn’t leave the hotel for a couple days.

The most worrisome incident that Engelstad has experienced was in Warsaw, Poland in 2013. After visiting the city center, he got on the subway to return to his hotel. Before reaching his stop, the train suddenly stopped in the tunnel. Engelstad heard loud bangs that sounded like explosions followed by an urgent sounding message in Polish over the intercom system. Passengers began screaming and running to the other end of the train as the car filled with a thick, green smoke. For a moment, he felt sympathy for the passengers’ plight before realizing that he was stuck in there, too. With no English speakers to translate the intercom message and finding it difficult to breath, Engelstad watched as passengers panicked and pried open windows and doors to climb out of the train and into the tunnel. But there was smoke in the tunnel as well and so he helped screaming passengers scramble to get back onto the train. At that point, he wasn’t sure if he was going to get out alive. Finally, the train began moving again and reached a stop where everyone poured out. Eight passengers had passed out on the floor and were taken to the hospital for smoke inhalation. As it turned out, there was an electrical fire beneath the brand new Inspiro train.

Other hazards Engelstad encounters are of the natural kind. During trips to Botswana, he stays in a small hut with a grass roof and carries a whistle to alert his hosts if he spots wildlife. Guests are not to walk alone outside of their huts as the area is populated with predators – lions, leopards and hyenas. Engelstad says he greatly enjoys his visits to Africa, in part because of the beauty and the wildlife, but also due to the ease of communication. He’s found that English is the language of business in Africa and he has an easier time communicating in Africa than other places.

The least developed country Engelstad has visited is Bangladesh, a country where U.S. government officials are currently not allowed to be out in public due to terrorist activity. There he assists famers with storing the country’s dominant commodity of rice. Despite the travel warnings, he says he has only experienced kindness and a bit of popularity as he’s posed for photos with locals that had never met an American.

It’s all part of a day’s work for Engelstad, who says his job is essentially to develop relationships with dealers and customers.

“It takes time. They don’t know you, you don’t know them. It takes multiple visits and patience.”

Superior Grain Equipment’s presence in developing countries is key to many smallholder farmers’ livelihoods. The grain bins allow groups of farmers to share storage space, keeping losses to a minimum and giving the farmers more control over their product. With proper storage, farmers can hold on to their crops until they receive the desired price.

Engelstad says, “Our ultimate goal is to help feed the world and we have a great product to do that.”