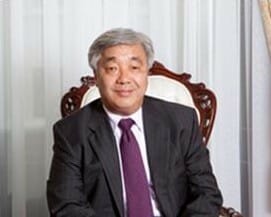 The recent trip to North Dakota by the Kazakhstan Ambassador to the U.S. is being called a success.  Earlier this month, Ambassador Erlan A. Idrissov traveled to the state with a goal to bolster the number of North Dakota businesses and industries doing business with Kazakhstan.

North Dakota and the Eurasian country currently have a solid relationship.  There have been well publicized news reports of cattle being flown from North Dakota to Kazakhstan, and ag machinery has a market there, but the Ambassador and local business leaders want to expand that relationship.  North Dakota Trade Office Executive Director Dean Gorder says the purpose of the trip was three fold:  to help solidify ag equipment financing for buyers in Kazakhstan; to strengthen the relationship between Kazakhstan and North Dakota equipment manufacturers; and to meet with the Governor, Lieutenant Governor and Agriculture Commissioner of North Dakota as well as the President of the Bank of North Dakota. “We appreciate the Ambassador taking the time to visit North Dakota and engage with business and government leaders,” Gorder said.  “We feel this visit exceeded our expectations.”

Proof of how successful the working relationship is between Kazakhstan and North Dakota is local business leader and Amity Technology President Howard Dahl.  The Kazakhstan government has nominated Dahl for the role of Honorary Consul for Kazakhstan.  The Kazakhstan government recognized Dahl’s reputation and good standing in the business community.  In this role Dahl will represent the upper Midwest and help facilitate business between the two regions.  “It was a very special visit of Ambassador Idrissov to North Dakota.   No one could have imagined ten years ago that a special bond would be built between the people of Kazakhstan and North Dakota.   As in all good relationships there is a truly mutual benefit.  It is truly a surprise to me to be nominated to this role of Honorary Consul for Kazakhstan in the upper Midwest of America, and in that role I hope I can in, some small, way enhance the good relationships that already are in existence.  Ambassador Idrissov is a very winsome individual and we hope he comes back often to visit us” said Dahl.

Discussions continue between North Dakota and Kazakhstan.  As this relationship grows, there will be more opportunities for North Dakota businesses.