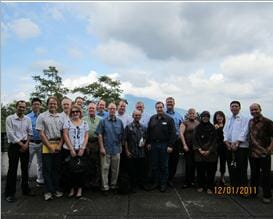 Twelve North Dakota companies, led by the North Dakota Trade Office (NDTO) in conjunction with the North Dakota Department of Agriculture (NDDOA), returned home this week after what is being called a successful Trade Mission to Indonesia and Vietnam.

“Indonesia and Vietnam are emerging markets with tremendous potential,” said Commissioner Goehring.  “They are experiencing economic growth at approximately 6.2 percent, and their middle class is expected to grow by 8 to 10 percent in the next 10 years.  With more disposable income, Indonesian and Vietnamese diets are changing to reflect a desire for more protein as well as higher quality and safer food for their families.  North Dakota can offer the foods these countries need.”

To fulfill the desire for food safety and food security, both countries are seeking feed grains such as corn, soy meal and distiller grains.  There is also interest in high-quality North Dakota products such as dark northern spring wheat, food grade soybeans, dairy products, peas and lentils, dairy and livestock genetics as well as flaxseed.

For North Dakota delegates, the goal was to capture greater market share in their respective industries in both Indonesia and Vietnam.  Organizations such as Food Export-Midwest, FAS and the American Soybean Association (ASA) played a pivotal role in the Trade Mission planning for value-added agriculture producers.  A number or agricultural delegates participated in Food Export-Midwest’s Branded Program, which provides 50 percent cost reimbursement for a wide variety of international marketing activities.

“There were several [buyers] ready to sign a contract today,” Flaten said.  “It has to be one-on-one across the table.”

Like Beverly Flaten, many North Dakota delegates saw tremendous opportunity to sell products.  However, companies must do their due diligence and establish trusting relationships with potential buyers before contracts are signed.  Trade Missions are a way to meet with potential buyers face-to-face and begin conversations that may lead to sales.

“Our bottom line with Trade Missions is to create an environment that fosters relationship building for our North Dakota companies and overseas buyers,” said NDTO Director of International Marketing, Mark Johnson.  “With the help of organizations such as NDDOA, FAS, ASA, Food Export-Midwest, USCS and the North Dakota Soybean Council, we were able to facilitate introductions with serious buyers in Indonesia and Vietnam.  We’re happy to report that this trade mission was successful, and we’re looking forward to continuing these relationships.”

If you would like to learn more about the Indonesia and Vietnam Trade Mission, or future NDTO Trade Missions, please contact Brittany Posey at (701) 231-1155 or by email at Brittany@ndto.com