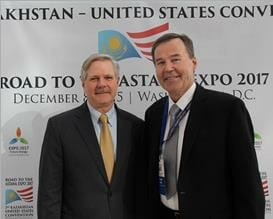 From the office of Senator John Hoeven

On Dec. 8, 2015, Senator John Hoeven congratulated Howard Dahl, who was honored by the country of Kazakhstan for doing business in the nation for 25 years. Dahl, the President and CEO of Amity Technology and Honorary Consul of Kazakhstan in North Dakota, was presented with the medal during the 3rd Annual Kazakhstan-U.S. Convention in Washington, D.C. Hoeven spoke at the event to honor Dahl and highlight the important trade relationship between North Dakota and Kazakhstan.

“Howard Dahl has been a tremendous ambassador for North Dakota and this award is a fitting recognition of his work over the past 25 years to bring much needed products and services to the people of Kazakhstan,” said Hoeven. “The people of North Dakota and Kazakhstan have benefited greatly from our partnerships. Together, we have tremendous opportunities for trade that will grow both our economies.”

Hoeven highlighted trade opportunities between North Dakota and Kazakhstan. As governor of North Dakota, Hoeven worked with state and government leaders to establish the North Dakota Trade Office in 2004 in an effort to promote global trade relationships. In the years since, Kazakhstan has become a valuable trade partner.

Hoeven cited the “flying anguses” as one example of the opportunities from this partnership. In 2010, two North Dakota cattle producers loaded a Boeing 747 with livestock bound for Kazakhstan to improve the genetics of Kazakh herds. About 170 pregnant cows and heifers weighing more than 80 tons were loaded in metal crates at the Fargo airport and shipped by air freighter to Astana, Kazakhstan. The Angus and Hereford cattle were bred to withstand a North Dakota winter, which made them well-suited for the climate in Kazakhstan.

With oil and other natural resources, Hoeven said that Kazakhstan has great potential for foreign investment not only in agriculture, but also in energy, minerals, transportation and communication infrastructure.