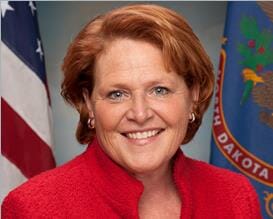 Due to “a big bump in the road” – the delay in passing a new farm bill – two of the most essential programs that aid the exporting efforts of farmers and ranchers have expired, according to U.S. Department of Agriculture Under Secretary for Farm and Foreign Agriculture, Michael T. Scuse, and U.S. Sen Heidi Heitkamp.

The two spoke with North Dakota farmers and agricultural leaders about the expiration of agriculture export programs due to the lack of a farm bill during a roundtable discussion at the USDA Northern Great Plains Research Lab in Mandan, N.D. on Friday, Nov. 22.

Both Heitkamp and Scuse emphasized the importance of the proposed long-term farm bill, and the positive effect it would have on the state of North Dakota continuing to thrive in exporting local farm crops.

“It’s not done yet,” Heitkamp said about a long-term farm bill. “We've hit a big bump in the road, but I remain optimistic.”

According to Heitkamp, the main hold-up in the passing of a long-term farm bill is the differences in planted vs. based acres for cotton.

“Any glitch with cotton, is a glitch in the farm bill,” said Heitkamp. “I think we can get something done, because the consequences are inexcusable to not get a farm bill.”

“We just experienced the best five years of agricultural trade in the history of this nation,” said Scuse. “The U.S. is recognized as a supplier of reliable products, and the quality of U.S. products is second to none. We should continue to see our exports expand.”

North Dakota is currently ranked fifth in the country in agricultural trade, with $4.13 billion in ag exports, which accounts for more than half of on-farm cash receipts in the state.

In North Dakota alone, ag exports support approximately 45,173 jobs both on and off the farm. These jobs include food processing, storage and transportation.

Since 2006, North Dakota Ag exports have more than doubled with an 117 percent increase in exports in the previous seven years.

A few members of the roundtable expressed their exporting concerns to Heitkamp and Scuse, including ag exports taking a back seat to oil shipments in regards to railway space, and the lack of availability of appropriate containers for shipping their exports.

Earlier in the day, Heitkamp and Scuse attended the North Dakota Farmers Union State Convention in Minot, N.D., where Heitkamp urged farmers and ranchers to help her by continuing to keep pressure on lawmakers to get the farm bill signed into law.

Heitkamp mentioned that she is hopeful of getting the farm bill passed by the end of the year, and that she is continuing to work to make sure North Dakota’s voice is heard during the ongoing negotiations.

Heitkamp made a similar pitch to members of the North Dakota Farm Bureau at a meeting Saturday.

Heitkamp expressed satisfaction that after multiple delays by the House of Representatives, both chambers are working to reach a compromise. It is her goal to see both sides work together to create a farm bill that will work for North Dakota farmers and ranchers as well as all U.S. producers.