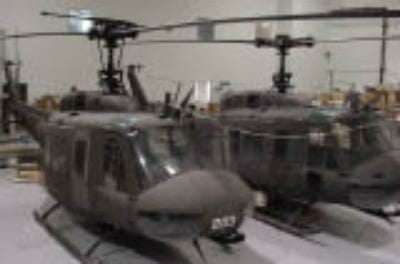 Barbara and K.C. Hemelstrand close some of their largest business deals in their company’s hip, low-lit recreation room complete with theater seats, a large movie screen and a wet bar.

Perched high in an aircraft hangar-turned warehouse along the southern edge of Fargo’s Hector International Airport, the rec room and nearby offices are a far cry from the Hemelstrands’ spare-bedroom startup of 11 years ago.

Since then, the Fargo couple has built Dakota Air Parts International Inc., into one of the world’s largest distributors of surplus military aircraft parts.

“It was all a very well laid-out plan,” K.C. said, instigating a laugh from a group of employees gathered in his office.

“Really, we saw the potential, but didn’t know where it would take us at first,” K.C. said. “It’s been a lot of fun getting to this point, but we still have a lot of mountains to climb.”

Though diversifying, the Hemelstrands built Dakota Air Parts on the worldwide demand for the military’s UH-1H helicopter, a reliable workhorse known as the Huey.

Dakota Air Parts ships flight-ready Huey helicopters and all sorts of surplus military aircraft parts to practically every U.S.-friendly country in the world.

The aircraft dealers buy surplus helicopters at government auctions and then resell them for use around the world to fight forest fires and spray crops, for drug interdiction efforts in South America and for big action scenes in Hollywood blockbusters.

The Hemelstrands’ business also includes selling fixed-wing aircraft parts and a brokerage service that brings buyers and sellers together.

Every agreement to sell a Huey for export must be approved by the U.S. State Department, and every country has its own export-import requirements and licensing regulations, Barbara said.

“After 9/11, exporting was tough, but it has become easier in the last year,” she said.

The Hemelstrands said they credit the North Dakota Trade Office and the U.S. Commercial Service with helping them clear export barriers and identify new markets.

“We’ve had a lot of support to overcome those challenges,” she said.

Today, Dakota Air Parts operates from a 12,500 square-foot warehouse for helicopters and a large inventory of aircraft parts. The building includes 3,000 square feet of office space that accommodates most of the company’s 18 employees and Rotor, a black-and-white Maine Coon cat found among helicopter parts in a large crate shipped from Louisiana in September 2004.

“He was tiny, half dead when we found him,” Barbara said. “He must have been in there for six or seven days.

“Now, he pretty much has the run of the place and everybody spoils him.”

Along with a busy Fargo sales staff, Dakota Air Parts employs a representative who is based in Morocco.

But the company’s most important international sales force can be found in a climate-controlled room in the company’s Fargo office.

Inside, stacks of computers loaded with a one-of-a-kind tracking program, process information on all sales of U.S. surplus property.

The computers spit out information that gives Dakota Air Parts an inside track on high-demand aircraft and aircraft parts. The data tells them how much aircraft and parts are selling for and who is buying them.

Other computers process Internet-based orders from around the world.

“We can track anything with a national stock number, from pencils to the helicopters we bring in here,” Barbara said.

“That’s really the reason why we have grown this business,” she said. “Information is key.”