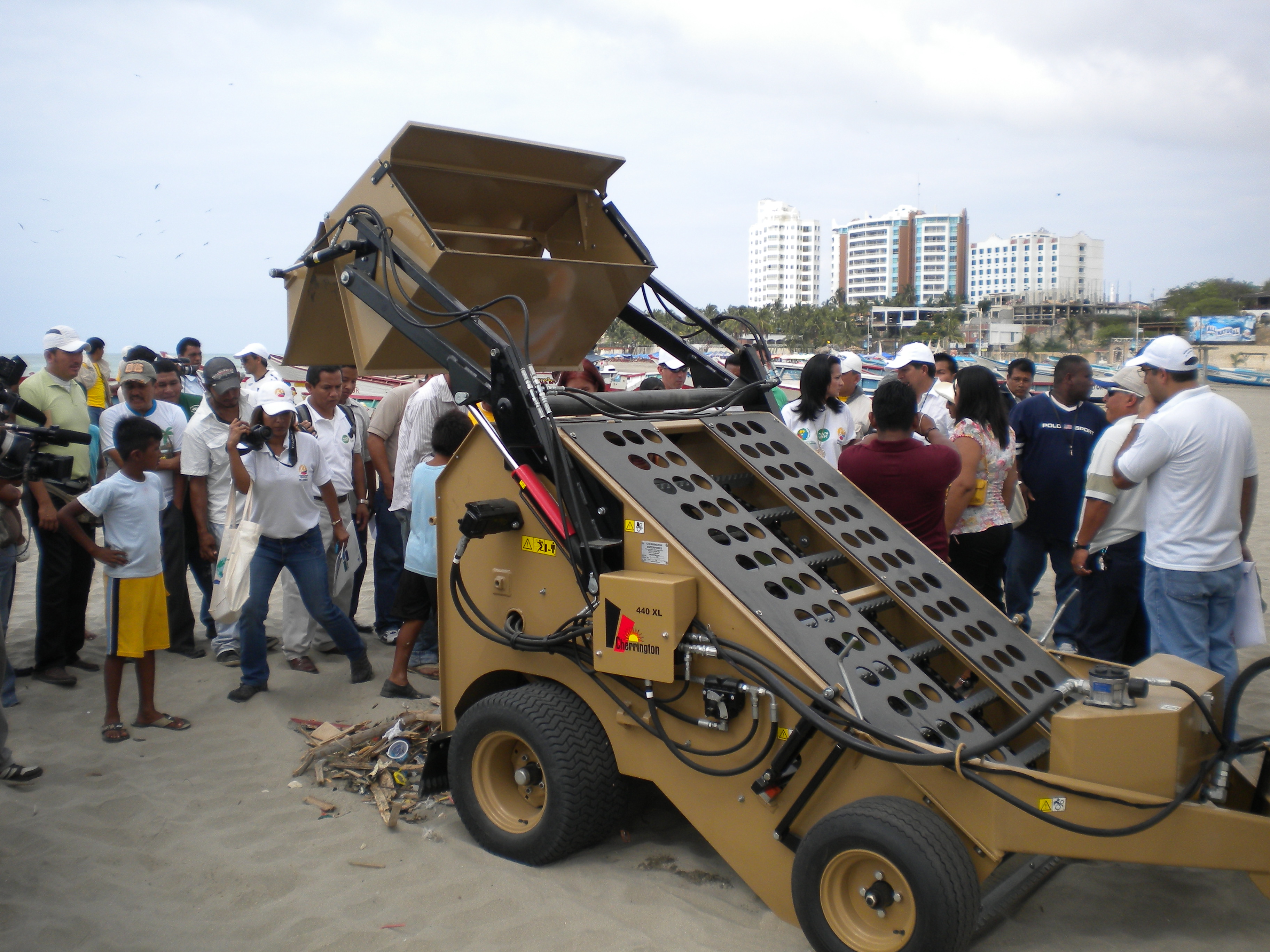 Congratulations to NDTO member company Cherrington on a recent business deal with Ecuador!  The sale marks the largest single transaction the company has made in Latin America.  In February, Cherrington received a sales order for 27 beach cleaners.  The machines were delivered in March and May 2011 with two technicians on site for the installation and training of the 27 machines.

Terry Iten, Sales & Marketing Administrator with Cherrington Enterprises, Inc. explains how the deal happened: “We had several inquiries from the region, but it was very difficult to evaluate the ability of each distributor.  After many e-mails and phone calls a decision was made to go with the one we felt had the best ability to present and sell our features and benefits.  Although he was several hours from the coast he was the most honest with the information that the Government was more comfortable working with a Spanish speaking Beach Cleaner manufacturer from Spain, and that the specifications had already been written around their machine.  We had Spanish brochures but we quickly translated our operator’s manual to help better explain the design and method that is used in the Cherrington Screeners / Beach Cleaners.  There were several weeks of rather frustrating presentations and negotiations but we did prevail and were awarded the supply contract.”

Cherrington exports more machines than it sells in the US and their marketing plan is globally focused.  But employees say Midwestern ingenuity, workforce skill and work ethic make this the best place in the world to build equipment.  The McPherson family (who purchased the Cherrington line in 2001) has a long history of building landscape equipment in this region.  The McPherson’s and their employees built and distributed the Harley line of rock pickers and power rakes in their company, Glenmac Inc. for 30 years (that product line was sold in 2005 to Paladin Brands).   In the early years of that company, the Harley Rock Picker was used to clean beaches in a few locations throughout the world in addition to harvesting field rock and roots for agricultural applications and golf course building.

About the same time, Roger Cherrington had the idea of building a beach cleaner based on the concept of a potato picker and did so in his shop near Fairfax, Minnesota.  Then he traveled in the wintertime to California beaches doing demonstrations and building a market there for mechanical beach cleaning.  The two companies crossed paths at beach demonstrations and contests over the years and in 2001 when Roger Cherrington decided to sell his business he called his acquaintance, and once competitor, Mac McPherson.  They soon joined the expertise of their two companies to build the Cherrington line of screeners you see today on beaches, landscape sites, horse tracks and gunnery ranges all over the world.

World-wide, most of Cherrington’s customers use the large, high capacity models for ocean beaches, but Cherrington offers a full line of beach cleaners (self-propelled and tractor models, high capacity and compact) which are used for beach cleaning on any size beach.   Cherrington’s customers screen clean lakeshores throughout the upper Midwest, including Minnesota and Iowa, as well as the Great Lakes region, including Michigan, Wisconsin and Illinois.  Cherrington’s compact Beach Cleaner line includes models that can be pulled with ATVs or small tractors and wireless remote-controlled, self-propelled Beach Cleaners.  These models are often sold to private homeowners with beachfront property as well as tourist destinations such as Typhoon Lagoon and Blizzard Beach at Disney World in Orlando.  Resorts with man-made beaches, such as the wave pond at Mandalay Bay in Las Vegas, use the small remote-controlled model for daily grooming and removal of trash.  Cherrington Beach Cleaners are able to screen out material down to 3/8” in diameter, so it is a popular tool not only for leaving the beach clean and looking well groomed, but also for safety - removing items that could prove dangerous to sand volleyball players.  Cherrington supplied compact Beach Cleaners for the sand volleyball competition at the Olympics in Beijing in 2008 and have that contract again for the 2012 Olympic Games in London, U.K.

Cherrington beach cleaners regularly load rocks, broken shells or glass, litter, animal waste, medical waste, wood, and seaweed.  They also can aid in the cleanup of an oil spill.  One of the company’s biggest challenges was their contribution to the clean-up efforts after the Deepwater Horizon Incident in the Gulf of Mexico in April 2010.  Cherrington supplied 25 high-capacity Beach Cleaners throughout the Gulf.  When they delivered the first load of the large self-propelled Model 5000 to BP on Memorial Day last year, they were immediately hired to provide factory trained operators and maintain the six machines for BP at that site – one of the areas hardest hit by the spill. “This was our first opportunity to tackle a contracting operation of this magnitude.  For the first few months, our crew worked 24 hours a day removing oil soaked sand from the beaches for remediation,” added Iten.  Throughout the winter they continued to work through the various phases of the cleanup, including the last stage of removing small tar balls the size of a dime.   Now, after 51 weeks of non-stop work, except for weather related delays, the cleanup work was completed in May.  BP owns the machines which are in position in the Gulf should a storm force more oil ashore.  Cherrington says they are committed to return to the gulf if they are needed to operate and maintain the machines again.