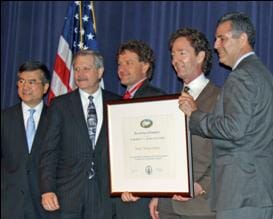 North Dakota Trade Office member Fargo-based Brandt Holdings Company was awarded a 2011 Presidential E-Award for excellence in exporting on May 16, 2011.

The President's "E" Award was created by Executive Order of the President on December 5, 1961, to afford suitable recognition to persons, firms, or organizations which contribute significantly in the effort to increase United States exports. It is the mark of excellence for any firm engaged in exporting their manufactured good or service and for export service providers.