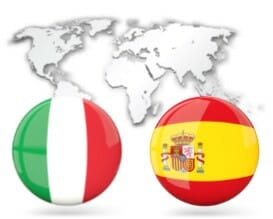 North Dakota companies returned last week from a trade mission to Italy and Spain where the focus was on specialty crops. The mission was led by Agriculture Commissioner Doug Goehring, and focused on the state’s pulse exports. Four North Dakota companies traveled to Naples, Italy and Madrid, Spain, two of the largest pulse markets in Europe, on March 5-9 to promote their beans, peas, chickpeas, lentils and borage to potential buyers.

Trade mission organizers included the North Dakota Trade Office (NDTO) and in Spain, Abstoss World Gastronomy, a company that specializes in educational gastronomy programs and events. The USDA Foreign Agricultural Service (FAS) in both Italy and Spain also assisted with educational and networking meetings as well as one-on-one meetings with buyers.

The trade mission began March 5 in Naples, Italy with delegates welcomed by Consul General Mary Ellen Countryman, and briefed by the FAS and U.S. Consulate officials from the political and economic divisions. From there, delegates met with a prominent Italian food producer and attended a reception at the home of Consul General Countryman. The following day the delegation toured and attended meetings with three leading pulse importers and packagers.

On March 7, the group departed for Madrid, Spain where they spent the next several days attending one-on-one meetings with Spanish buyers and touring pulse importers and distributors. Delegates also attended market briefings with FAS officials and a reception at U.S. Ambassador to Spain Richard Duke Buchan III’s residence.

Commissioner Goehring attended meetings with the Minister of Agriculture in Italy and leaders from the Ministries of Economy and Agriculture in Spain. He also met with Ambassador Buchan and pulse industry groups. He focused on promoting North Dakota partnerships, why the state is unique, and the importance of two-way trade.

“The Italian Minister of Ag and I had a great meeting, talking about Italy’s geographical indicators and how our work together can be a way to enhance and really support economic activity,” said Goehring. “In Spain, I also had good conversations with government individuals and U.S. Ambassador Buchan. Spain is a big consumer of pulse products and North Dakota has a lot of pulse products that can find a home in Spain.”

Goehring recognized opportunities for additional North Dakota commodities, noting that both Italy and Spain import high quality wheat and durum, while North Dakota is the number one source in the U.S. of hard red spring and durum wheat.

This was the third North Dakota trade mission to both Italy and Spain, with previous NDTO missions held in 2005, 2010 and 2014.

The North Dakota Trade Office is a membership-based, private/public partnership that provides education, research, advocacy, organization, and leadership so that NDTO members and North Dakota companies can increase exports and grow their international business.